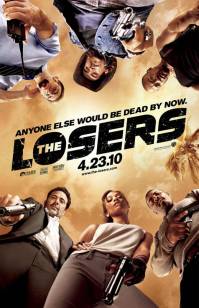 Synopsis
When a special-ops group is double-crossed, they go after the rogue CIA agent Max (Jason Patric) who left them out to dry. Clay (Jeffrey Dean Morgan), Jensen (Chris Evans), Roque (Idris Elba), Pooch (Columbus Short), and Cougar (Óscar Jaenada) meet Aisha (Zoe Saldana), who offers to help the team get revenge, but she has her own reasons for going after Max.

Review
With a strong cast, The Losers had great potential, but unfortunately, it didn’t quite meet all the expectations.  The strongest component of The Losers is the dialog between the characters and the way they played off each other, especially in one-on-one situations. Evans’ was the comedic backbone of the cast, just like when he played Johnny Storm in Fantastic Four, and his performance was the best of the film. I was a little let down by Elba’s performance. Normally he is a pretty strong actor, even in his supporting roles, but it just wasn’t there this time around. They tried to make Patric’s villain comical, but Patric didn’t have the chops to pull it off. However, he did have a funny jab at the cliché where the villain nods his head and the henchmen seems to know exactly what he wants. The Losers is a fun movie that has a strong comedic foundation with Evans, but the rest of the cast can’t stand with him, hindering what could have been an awesome action comedy.