This was actually the first review I had done when I started writing reviews earlier this summer.  I forgot about it until a few weeks ago, so I held off posting it until the the home release of the film.  If I had written it more recently, I would have included something about how the ending offers a potential origin for Ultron in Avengers 2: Age of Ultron, but I’m posting as-is.  I hope you check out this film because it’s truly amazing.  But enough of my blabbing, onto the review! 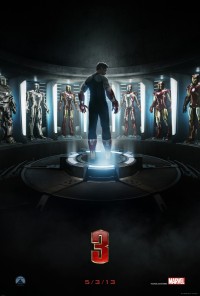 Synopsis
After the events of Marvel’s The Avengers, Tony’s (Robert Downey Jr.) world is flipped upside-down. Realizing there is much that he does not understand, he buries himself in his workshop. Meanwhile, The Mandarin (Ben Kingley), leader of the Ten Rings, increases his reign of terror across the US. When his Malibu home is destroyed, Tony is forced to confront his demons and learn if he makes Iron Man or Iron Man makes him?

Review
Wow. Just wow. Iron Man 3 is an ingenious film crafted by Marvel and a good cap to the journey we have seen Tony make through Phase One. In Iron Man and Iron Man 2, we get to see Tony transform into Iron Man and what he can do while in the suit, but he is still a playboy throughout most of those movies with some of that changing towards the end of 2. But in The Avengers we see him make the full transformation into a hero, including self-sacrifice. All of these events have made an affect on Tony that is a central focal point for Iron Man 3. In my opinion, The Avengers was essentially Iron Man 2.5, building on Tony Stark’s character more than the other heroes.

One of my favorite aspects of Iron Man 3 is we get to see how Tony is able to operate while outside of the Iron Man armor. Sure, I would have liked to see more of the Mark 42, it was an awesome suit, but we have seen Tony in armor for three movies already. It’s a nice change of pace to see what he can do outside the armor, using just his brains and ingenuity.

There is a TON of humor laced throughout Iron Man 3 and it works. Whenever things get too serious, a joke is made to lighten the mood back up. There were a few times it felt a little forced, but for the most part it was well executed and enjoyable.

Despite not being in the suit too much, there are quite a bit of action sequences. And they are all awesome! It is obvious that a lot of time went into the special effects and it pays off. The effects are beautiful and almost worth the admission price alone. Plus, not only does Tony get a few punches in outside the suit, Rhodey and Pepper get in on the action as well. Pepper even dons the suit for a while!

It will be a sad day when RDJ hangs up the Iron Man suit for good.  He has become synonymous with Tony Stark and it is difficult to imagine anyone else in the role.  On the other hand, I have started to accept Don Cheadle as Rhodey, but there is a part of me (most of me, actually) that wishes Terrence Howard would not have been replaced.  It is still awkward to see RDJ tower of Cheadle then have them see eye-to-eye when they are in the suits.  And I think Howard had better chemistry with RDJ than Cheadle does, but Cheadle has definitely grown into the role.

I only really have two big gripes with Iron Man 3. My first is the portrayal of the Mandarin. I’ll admit that I was one of those comic book guys who were salivating when I saw him in the trailer. I was really excited to see Iron Man’s greatest enemy (Mandarin is to Iron Man as Green Goblin is to Spider-Man) finally hit the big screen. I won’t spoil anything, but his depiction wasn’t what I was expecting. But you know what, in the context of this film, I’ve excepted it and realized it actually made the plot that much more exciting and interesting. Had the Mandarin been exactly like his comic book counterpart, it would have changed the entire film, and it is hard to say if the product would have been better.

My other grievance is the use of extremis, although this is due more to the comic fan boy in me than the movie itself. Since extremis essentially rewrites DNA, this allows for endless possibilities for super powers. However, all we see is the ability to melt things with their bodies. The final fight at the end would have been a perfect place to showcase how versatile extremis can really be. But like I said, that is just the comic nerd inside me.

Iron Man 3 is an excellent film that blends characterization with action, while never detracting from either and forms an excellent kick-of to Marvel’s Phase Two slate of movies.

Also check out my reviews for the other films in Marvel’s Phase 2: Thor: The Dark World, Captain America: The Winter Soldier, Guardians of the Galaxy, The Avengers: Age of Ultron, and Ant-Man.