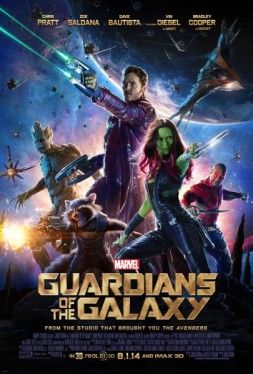 Review
I’m not sure what Marvel put in the Kool-Aid but I’m drinking it up. Guardians of the Galaxy is pure fun. On top of that, it tells a great story and looks beautiful. I have often praised Iron Man for being the model on how to properly make a superhero origin story, now I can say that Guardians of the Galaxy is the definitive example on how to create a superhero team origin.

Ever since The Avengers, Marvel movies have had a lighthearted feel to them. I am a big fan of this because it prevents them from going too dark, although they still may have serious moments. This tone also allows for some great humor. With comedic actors Chris Pratt and Bradley Cooper, Guardians is the funniest superhero movie since Iron Man 3. I don’t think there was one moment where I wasn’t smiling. Pratt is definitely the highlight of the film but I’d say Cooper is a strong second. Despite not having much screen time, John C. Reilly stole his scenes. He wasn’t overly heavy with the comedy but instead was more subtle, contrasting with his usual movie antics.

Currently, the Guardians of the Galaxy soundtrack is the best selling album in the United States, and for good reason. The music is a great mix of classic 1970s and 80s rock and pop songs. If I didn’t have most of the songs already I would probably go pick it up. Besides the music, there are many references to the 80s. My favorites being Quill calling Rocket “Ranger Rick” and Quill explaining to Gamora the plot of Foot Loose.

This is one of the most unique movies I have seen in awhile. I couldn’t help but feel like I was watching The Avengers but in a skewed, Thor setting. Not many movies have a gun-toting, talking raccoon who travels with a talking tree. Actually, I don’t think any others do. Being the Marvel fan that I am, I appreciate them dipping into their less popular franchises.

I absolutely enjoyed Rocket and Groot. The duo reminded me of R2-D2 and C-3PO from Star Wars (except this time the small one was the interpreter). Besides Rocket being one of the stand-out characters of the film, several of his scenes were made better by his interactions with Groot. To go with the rest of the film, they were fun and goofy with the right amount of action sprinkled in.

With the set-up Benicio Del Toro’s The Collector had in the mid-credits sequence in Thor: The Dark World, I expected him to have a more integral role in the story.  But the more I thought about it, I realized that he could become Marvel’s next Agent Coulson.  In the comics, he is very involved in the cosmic side of things, and he could do the same in the films.  He could act as the glue that binds several of the cosmic properties that are sure to appear over the next several years, showing up to offer explanations and add cohesiveness to the films.

If there was one thing I wished this movie did better, it would be to expand on the relationship between Gamora and her sister, Nebula (Karen Gillan). Guardians did well to build and showcase the rivalry between the adopted sisters, but didn’t do much more than that. There is large potential for stories based on their relationship, similar to Thor’s and Loki’s relationship, that I hope it’s picked up in future movies.

Marvel once again raises the bar on the superhero movie genre with Guardians of the Galaxy.  It’s playful tone, great action sequences, lovable characters, and beautiful special effects blend together perfectly to create one of definitive team origin movies to date.

Also check out my reviews for the other films in Marvel’s Phase 2: Iron Man 3, Thor: The Dark World, Captain America: The Winter Soldier, The Avengers: Age of Ultron, and Ant-Man.

18 thoughts on “Guardians of the Galaxy Review”