Fritzi over at Movies Silently is hosting a blogathon that is everything fairy tale.  I didn’t hesitate to jump in and review the fairy tale movie I have been wanting to watch for a while: Enchanted.  Although it is not a direct adaptation of a specific fairy tale, it contains many of the basic notions of the classics.  To read the other entries in this blogathon, head over to Movies Silently by clicking on the Fairy Tale Blogathon banner below. While you’re there, peruse Fritzi’s site a little bit to see someone who appreciates and celebrates silent era of film history. 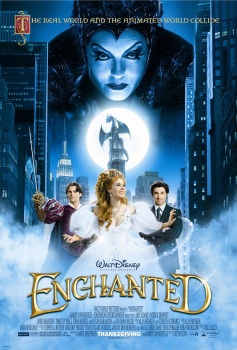 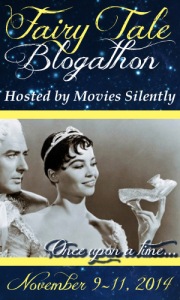 Giselle (Amy Adams) is on her way to her wedding with Prince Edward (James Marsden) when his evil stepmother, Queen Narissa (Susan Sarandon), transports her from the animated world of Andalasia to New York City in the live-action world. There, she meets Robert Philip (Patrick Dempsey) and his daughter, Morgan (Rachel Convey). After spending some time together, Giselle and Robert begin to change each others view on true love.

Review
Enchanted begins in an interesting place. Normally, it would be the end of the fairy tale, when the prince and princess get married. However, here that is just the beginning. It is a good way to get into the mindset of soon-to-be-princess Giselle. So when she gets into the “real world” and meets Robert, there is a clear change between her character in the beginning and her character at the end. Speaking of Giselle, I really like Amy Adams as Giselle. She clearly has a fun time with character and capturing Giselle’s storybook innocence. It is easy to tell this was a Disney movie because it had several tropes from classic Disney fairy tales, including, but not limited to, a poison apple, evil stepmother, and true love’s kiss.

This movie is a stepping stone to where Disney’s more recent movies have been going about the idea of true love. It looks like it will end not how you think, then Disney plays it safe and it ends exactly how you think it will. My favorite part about the film was how out-of-water the characters from Andalasia were in New York City, especially Prince Edward. I had a good time watching Prince Edward try to start singing in the middle of the park, only to get weird looks, exemplifying the difference between our world and theirs. Enchanted is an entertaining romp through a non-traditional Disney fairy tale that parodies the Disney classics.