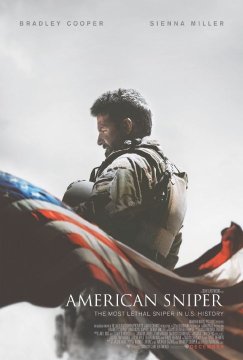 Synopsis
US Navy SEAL Chris Kyle (Bradley Cooper) becomes a legend for his skills as a sniper. But when he is home with his wife, Taya (Sienna Miller), he has a hard time leaving the war behind.

Review
There has been much controversy around American Sniper but I’m not going to get into all that. This is strictly going to be a review about this film as a piece of cinema. Now to be honest, the only reason I was interested in seeing this film was because it is directed by Clint Eastwood. Biopics aren’t usually my cup of tea but I must say that I rather enjoyed this film. Eastwood knew how to utilize the environment (both in and out of combat) to create tension. I constantly found myself needing to relax in my seat. Say what you want about this film, this is Bradley Cooper’s movie. He completely gets into the role of Chris Kyle and may be my favorite performance of his I’ve seen. Sienna Miller was great, too. Other than GI Joe: The Rise of Cobra, I haven’t seen any of her other movies, so I think I may be checking those out if I find the time. American Sniper is just as intense out of the action than in it, albeit more subtly, making it one unique movie experience.