Rob from Movierob stops by for the penultimate entry for 2015’s Christmas in July blogathon. He’s reviewing the 1951 A Christmas Carol.  Without further ado, here’s Rob!

Growing up in the States, I had many opportunities during the yearly holiday season to see many different adaptations of the timely story of A Christmas Carol.

Although, I always thought I’ve seen most of them, I came across this blog (by Rachel of SmilingLDSGirl) a few months ago that really put all my numbers to shame.

My two favorites of this classic tale have always been the Disney adaptation called Mickey’s Christmas Carol (1983) and Bill Murray’s modernized version of the story in Scrooged (1988).

For some reason, I always avoided one of the first adaptations of this story; the one from 1951. A number of friends (including Mutant over at Cinema Parrot Disco) have stated that this version is one of the best and after having seen this, I must agree.

The special effects used back then were never great, but they really did the ghost and travel effects quite well.

Alistair Sim was an excellent choice for the lead role of Scrooge and he did a wonderful job no matter the age he was portraying.

I also liked how they expanded Scrooge’s history a bit and gave us more of an explanation as to how he turned out the way he did.

This in and of itself makes this movie feel even more genuine.

Despite not having seen all of the versions of this story, I can truly say that this one feels like the definitive version of the story because of the detail and effort put in to it in order to give us such a wonderful adaptation of this timely Dickens classic.

Now for Rob’s person he would like to meet under the mistletoe, he chose someone who reminded him of his wife… Janine Turner in Cliffhanger. 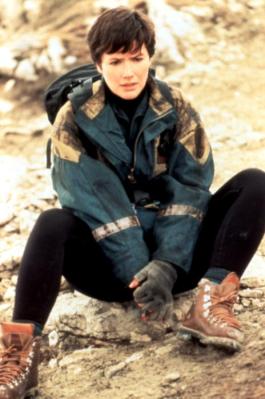 Thanks, Rob! You are one lucky guy if your wife is half as cute as Janine Turner. Rob has a thing for older movies, last year he reviewed It’s a Wonderful Life, which is great! It adds a nice variety to the celebration.  Coming up, I will be closing the blogathon with review of movie that was recommended to me: Four Christmases. Catch ya later!