Closing out week 2 of the Ultimate 80s Blogathon is Elena from Elena Square Eyes and her review of Crocodile Dundee.  Elena review all kinds of books and movies and creates weekly top ten lists covering a wide range of topics, so go check her site out.  Now, on to her review! 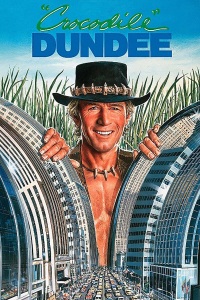 Why Crocodile Dundee is the Ultimate 80s Film:

Now I know I’m biased because Crocodile Dundee is one of those films I grew up watching from a very early age so it has a special place in my heart. It’s funny, it has action, a charming lead and a love story – what more could you want?

Released in 1986, Crocodile Dundee is directed by Peter Faiman and the screenplay is by John Cornell, Ken Shadie and Paul Hogan. It is about how when American reporter Sue Charlton (Linda Kozlowski) goes to the Australian outback to meet and report on an eccentric tour guide Michael J. ‘Crocodile’ Dundee (Paul Hogan) she gets more than she bargained for. After spending some time with him in the bush she invites him to come to New York with her and there he finds city life very different to life in Australia.

Mick Dundee is a great hero. He is smart and charming and not afraid to get in a fight. He can wrestle crocodiles and stand up to poachers (with the help of a stuffed kangaroo and a rifle) but that doesn’t mean he doesn’t always win. One of the great things about 80’s action heroes in general is that even if they are the good guys, it doesn’t always mean they won’t get hurt or at least knocked to the floor in a fight. When Mick gets cornered by some pimps he is losing the fight until his friend and limo driver Gus (Reginald VelJohnson) comes to his aid. That being said when it comes to a showdown with a mugger, Mick Dundee comes out on top and it gives us one of the most memorable and quotable scenes from the film.

Besides from being a tough guy, Mick is just so damn nice! He talks to anyone and makes friends with people who many wouldn’t give a second thought to like a taxi driver, a doorman or a couple of prostitutes. In some ways you could say Mick is naïve but really his naivety make him all the more nicer and accepting.

The music in Crocodile Dundee is very 80’s. It combines music from the decade with music that really feels like the sounds of Australia. In the final scene the music swells as Sue runs to the subway after Mick, the sound of the guitar, drums and wooden blocks pull you in as you desperately want them to reunite. Side note: Mick and Sue’s whole romance is very sweet and natural and the final scene in the subway is one of the best they-finally-get-together scenes in all movies ever.

One of the best things about 80s Movies is that so many of them have a unique sense of humour. Crocodile Dundee really plays on the fish out of water element, first with it being Sue not used to the Australian outback and then with Mick learning about a whole host of things including escalators and bidets in New York. Any scenes with Mick’s friend and business partner Walter Riley (John Meillon) are funny as Walt is often shaking his head at Mick’s antics. To be honest, any scene set in Australia where Mick or Sue are interacting with the locals have some humour in them.

Crocodile Dundee is the ultimate 80’s film because it’s a fun film that can be enjoyed by people of all ages. It has something for everyone, with romance, action, fights and comedy. It’s definitely the sort of film you can sit back and relax on a Sunday afternoon with.