Kicking off week three of the Ultimate 80s Blogathon is Rob from Movierob.  Rob is a power house reviewer, recently celebrating his 2000th film review! If you don’t follow his site, go check it out so you can keep up with his massive review archive.  In the mean time, Rob reviewed an 80s staple starring the late David Bowie: Labyrinth. 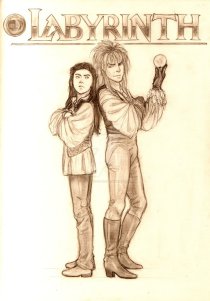 “Tell me Sarah, what do you think of my labyrinth?” – Jareth

Brief Synopsis – A young girl must go on a quest in a fantasy land to find and save her infant brother who has been kidnapped by the Goblin King.

My Take on it – When I heard that Kim and Drew were doing this Blogathon, I was thrilled because I’m such a fan of 80’s movies.

At first, I was racking my brain trying to decide what 80’s iconic film I wanted to watch and review for them until it hit me, that I should try and choose one I’ve never seen.

This is not an easy task since according to my recent research, I’ve seen 1001 movies that came out in the 80’s.

So, I started going thru lists of the Best of the 80’s in order to find a movie that I needed to finally see and lo and behold, Labyrinth came up.

I have heard of this movie and even seen bits and pieces here or there, but never saw the whole thing, so I knew that this is the movie I needed to watch for this blogathon.

As a kid, I was always a fan of Jim Henson’s muppet work both on film and on TV and as a kid really liked The Dark Crystal (1982).  Unfortunately, upon rewatch a few years back, it didn’t live up to my memories of it.

This, like that movie is a slight paradox because it’s seems like it should be for kids and is filled with kid friendly elements, but ultimately the themes are darker and more geared towards adults.

The use of Henson’s muppets as many of the characters makes it feel more child friendly obviously, but without the technology that we have now CGI just wouldn’t have worked and wouldn’t have felt realistic enough.

The mixture between live action and muppets actually works quite well here and it helps us believe that we have been transported to a different world.

Loved the way that they mixed thriller, adventure and musical aspects together to give us a very enjoyable film.

The recently deceased David Bowie is perfectly Creepy as the Goblin King.

Bottom Line – Fun adventure brought to us by Henson. Still a bit more geared towards adults then children due to the dark themes, but there is still what to find here for everyone.  Loved the mixture of real life and puppets especially when it was made in the days before CGI could make it look even better.  Nice mix of musical and thriller. Recommended

MovieRob’s Favorite Trivia – The owl in the title sequence is computer generated – the first attempt at a photo-realistic CGI animal character in a feature film. (From IMDB)