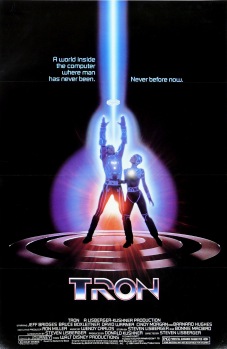 Synopsis
Kevin Flynn (Jeff Bridges) is a computer hacker who was fired from the company Encom. When searching for proof that his rival in the company, Ed Dillinger (David Warner), stole his code, he gets transported to inside of the computer system. With the help of a security program called Tron (Bruce Boxleitner), Flynn must make his way to the Master Control Program to escape the system.

Review
With movies like Rogue One and Furious 7 literally reviving diseased actors on screen and recent visual marvels like Doctor Strange, it’s truly impressive to see how far CGI has come in cinema. Considering where we are today, it can be a bit jarring to see animation that was done with less computing power than the phone currently in my pocket. But as the old saying goes, it had to start somewhere. There is a lot to like and be fascinated with in Tron but it has its flaws, too.

Tron‘s director Steven Lisberger was ahead of his time when he wrote Tron, particularly in where he saw the future of computers. Being a programmer myself, I always enjoy when movies try to visualize and create a world inside of computer. In the early 80s, personal computers had just become a thing, with the Apple I and Apple II being released only a few years prior to this film’s released. Most people were in the midst of entering a world where computers were more than just an academic tool used in universities. For Lisberger to imagine this world inside this fledgling technology, as in-depth and detailed as he did, is impressive to me.

Now having geeked out about some computer history, I’m going to disappoint a lot of people. There is a very distinct feel to the world inside of the computer compared to the real world. Everything is monochrome with bright colors running through as highlights. I like the idea of the black and white color palette because it mirrors the binary nature of computer data and the color highlights could be imagined as data flowing through everything. Despite the uniqueness about it, I found it to be very distracting. Other movies have used this type of effect before with beautiful results, so I don’t think it was the idea of black and white with color highlights but rather its execution. It’s not very crisp here and it ends up being a distraction.

I don’t really know what it was but I couldn’t get into the story. With this featuring scientists and computer hackers, you would think this would be something I would be into. As flashy as the visuals are, they merely act as a distraction to catch your eye so you don’t notice the relatively flat characters and uneven pacing. The move is only an hour and a half long, so it breezes through the story quickly. With the two worlds, the computer world and the real world, it has two sets of characters to juggle. As a result, no one gets much development.

All the story focuses on is getting Flynn (Jeff Bridges) from point A to point B within the computer. It never stops to breathe, moving from one computer animated display to the next. This movie is more focused on showing off this new technology rather than using it to enhance the story. One of the reasons that Toy Story works so well is because although it was revolutionary in a similar vein as Tron, it told a story first then put the technology on top of that. I feel like I am watching an extended 1980s tech demo when I am watching Tron.

I thought Tron was OK 😐 At the time, films like Star Wars were pushing the boundaries of special effects while Tron was pioneering what was possible with the infant field of computer animation. It’s not hard to see it hasn’t aged well but to some, that turns into part of the film’s charm. I appreciate this movie for its historical significance and what it accomplished in computer animation but for me, I didn’t get into the story or behind the characters. It is quite the dazzling spectacle, unfortunately that isn’t enough this time to carry the film.

Also check out my review for the sequel, Tron: Legacy.