Today’s Ultimate 90s Blogathon entry comes from Charlene from Charlene’s (Mostly) Classic Movie Reviews.  As her blog’s name suggests, she mostly reviews movies from Classical Hollywood cinema but she doesn’t shy away from more modern films either.  Go give her site some love once you finish up here. Now, onto her review of The Adventures of Priscilla, Queen of the Desert!

Road trips have been a mainstay of travelling for as long as motorized vehicles have been invented. They involve a small group of individuals who often reveal a variety of emotions and opinions within a claustrophobic, confined space. This may create closer bonds among said parties or invoke greater distance and argumentativeness. Regardless, personal truths, epiphanies, and an increased sense of clarity can emerge from such heated discussions. All of the above occur in the vibrant 1994 Australian film “The Adventures of Priscilla, Queen of the Desert” directed by Stephan Elliott, whereby dramatic music magnifies the vast, tortuous landscape and diverse wildlife of the breathtakingly beautiful Australian Outback.

Anthony ‘Tick’ Belrose (Hugo Weaving) accepts a proposal to perform at a casino managed by his estranged wife in Alice Springs. He works as a drag queen in Sydney named Mitzi Del Bra in Sydney, and asks two other fabulous Sydney queens to join him – grieving Bernadette Bassinger (Terrence Stamp) who identifies as transgender, and flamboyant Adam Whitely a.k.a. Felicia Jollygoodfellow (Guy Pearce). In a cheaply bribed bus christened “Priscilla”, they travel to their destination with an extremely healthy dose of glitter, glamour, ABBA, and some stellar lip-syncing. Unfortunately, they encounter and experience intense discrimination, ignorance, and frustration. However, compassion, acceptance, bonding, mutual respect, and self-discovery grow throughout their journey.

In all of her glory, Priscilla acts as a vehicle to help the characters learn more about themselves and others through the act and art of conversation in a barren, isolated region. They each are confronted with fears surrounding relationships, judgment, and authenticity throughout the film, emerging with enhanced positivity, well-being, and self-actualization. This type of voyage is quite relatable to all individuals, as we all suppress aspects and tasks in our daily lives that seem insurmountable. Nevertheless, challenging these perceived and real fears can allow us to evolve into a more fulfilled, genuine version of ourselves. 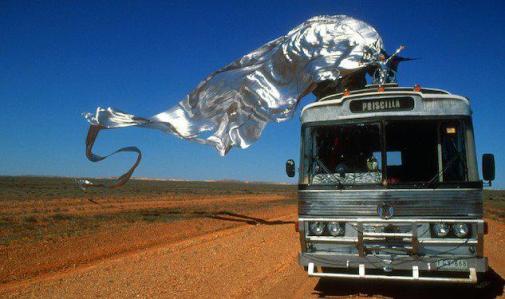 7 thoughts on “Ultimate 90s Blogathon: The Adventures of Priscilla, Queen of the Desert (1994) by Charlene’s (Mostly) Classic Movie Reviews”