I feel like I’m back on the elementary school playground because I have been tagged! Catherine from Thoughts All Sorts tagged me for the Five Flamming Hotties tag that was created by her and Gill from Realweegiemidget Reviews.  The rules are fairly straightforward:

Well, I’ve already taken care of the first requirement so let’s jump straight into my five favorite hotties from TV or film. Since I could have also included athletes, a close runner up was Alex Morgan.

My best friend and I watched Wild Wild West all the time, and I would be lying if I said Salma Hayek wasn’t one of the reasons why.  When she is wearing not much more than a corset, it is enough to make a teenage boy weak in the knees.  Besides her looks, she can command the screen just as good as any male co-star she is working with.  I’ll admit that I haven’t seen many of her more recent films but she’ll always have a place in my heart as on of my first crushes.

I first saw Jaimie Alexander in Thor as the ass-kicking Sif then shortly thereafter in The Last Stand.  Not only was she drop-dead gorgeous, she could kick-ass, too! Strong and beautiful, what more could you want? When she transitioned to the small screen in the TV series Blindspot, I jumped on immediately and haven’t been disappointed in both her or the show.

Scott Pilgrim vs. The World served as my introduction to Anna Kendrick.  I instantly fell in love with her quirky attitude, especially outside of films.  Watching her in interviews and looking through her twitter feed, she seems so chill and down-to-Earth.  Oh, did I mention she has a beautiful singing voice, too? So let’s get the run down: she’s adorable, she’s cute, she’s funny, and she’s a great singer. Basically, she’s the ultimate girl next door.

Like many, I was introduced to Emma Watson as Hermione in the Harry Potter series. Since then, she has gone on to do many great things, especially outside of acting. She has a bachelor’s degree in English literature, she’s a UN Women Goodwill Ambassador, she’s a leading advocate for gender equality and she’s done some modeling for good measure. She might just be the perfect combination of brains and beauty. 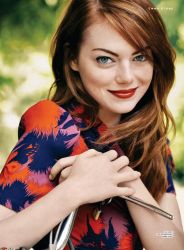 My number one flaming hottie was a no brainer (or was it a half brainer with a double twist?). Ever since Emma Stone hit the scene in Superbad and Easy A, I have had a tremendous crush on her.  This girl can take any role and make it fun and memorable.  Last year, she finally got the recognition she deserves with her best actress Oscar.  Although I like her red hair better than her natural blonde, she’s beautiful regardless of hair color.

Now that I’ve shared my Five Flaming Hotties, I guess all that’s left is to tag a few others. I tag

Thanks for the tag, Catherine! It was sure hard trying to narrow it down to only five.  I hope those of you who I tagged will participate.

Who are some of your flaming hotties?