Today’s entry for the Ultimate 70s Blogathon comes from the movie review monster Rob, from MovieRob. If you are somehow unfamiliar with Rob and his feats, you must be living under a rock. He has reviewed literally thousands of movies and is always participating in one blogathon or another. Definitely go check out his site to see for yourself. He joins this blogathon today with his review of the horror favorite The Exorcist. 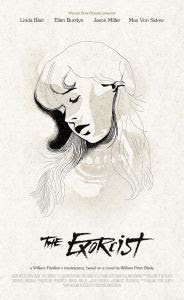 “There are no experts. You probably know as much about possession than most priests. Look, your daughter doesn’t say she’s a demon. She says she’s the devil himself. And if you’ve seen as many psychotics as I have, you’d know it’s like saying you’re Napoleon Bonaparte” – Father Karras

Brief Synopsis – After her daughter starts acting very strangely, an actress contacts two priests to try and help her.

My Take on it – This is a film that I recall seeing back in high school and absolutely hating.

I have never been a fan of films in the horror genre and stay as far away from them as possible whenever I can.

For this blogathon by Drew and Kim, I decided that I will attempt to get a new perspective on it and hopefully would find some way to enjoy it.

I really enjoyed the way this story is told and they are able to kepe things both interesting and thrilling the entire way through.

The story builds up at a great pace and never feels either rushed or drawn out.

They do an amazing job approaching this kind of supernatural story from a realistic viewpoint and only after trying all kinds of medical and psychological solutions do they attempt the supernatural ones.

They are able to make it seem conceivable and realistic that such an event could theoretically take place in our world.

The cast is perfectly chosen for this and they all help keep things exciting, powerful and even humorous when possible.

Obviously, I loved the fact that the detective played by Lee J. Cobb is a cinephile because it helps give the character a familiar and down to Earth feel to him.

This film has some great special effects and thankfully, I wasn’t scared by any of them, perhaps do to the fact that I knew more or less what to expect form this film.

This film was definitely deserving of being the movie to break the glass ceiling and garner  the first ever Best Picture Nomination in the genre of horror where only a handful of films have managed to duplicate in the 45 years since this nomination.

It managed to only win two awards that year for Best Adapted Screenplay and Best Sound.

It also was able to win the Golden Globe for Best Picture Drama, Director, Supporting Actress (Linda Blair) and Screenplay which is also an incredible feat.

I am so glad that I finally gave this film another chance because it really is a great film that everyone should probably see even once just to share in this enjoyable experience.

Bottom Line – So much better than I had recalled. This film builds the story up really well and keeps things thrilling and interesting the entire time. I liked the fact that they approach this supernatural subject from a realistic perspective and try to show that something like this can actually happen.  The pacing of this film works really well and nothing seems neither forced nor rushed.  The cast is great and they are do a fine job keeping this exciting and powerful. Definitely was deserving of being the very first film from the horror genre to break the glass ceiling and get an Oscar nomination for Best Picture along with 9 other nominations.  It managed to only win Best Sound and Best Adapted Screenplay. Highly Recommended!

MovieRob’s Favorite Trivia – The scene where Regan projectile vomits at Father Karras only required one take. The vomit was intended to hit him on the chest. Instead, the plastic tubing that sprayed the vomit accidentally misfired, hitting him in the face. The look of shock and disgust while wiping away the vomit is genuine. Actor Jason Miller, (Father Karras), admitted in an interview that he was very angered by this mistake. (From IMDB)