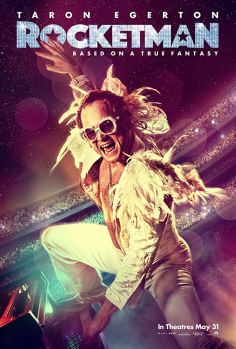 Synopsis
A musical fantasy about the fantastical human story of Elton John’s breakthrough years. (via IMDb)

Review
It must be the time of the musical biopic. Last year saw the release of Bohemian Rhapsody, the story of Freddy Mercury, and now we have Rocketman, the story of Elton John. Both are about prolific rock singers and both are directed by Dexter Fletcher. Despite their similar subjects and shared director, Rocketman doesn’t feel like a BR clone. It takes a different approach to its story telling and takes advantage of its rating.

One of the highlights of the film was Taron Egerton as Elton John. Egerton captures a wide range emotions. He’s charismatic when he needs to be, he’s vulnerable when he needs to be, and he’s dour when he needs to be. It’s clear that Egerton is putting everything he can into the part and it really elevates the film, especially since it fails or succeeds on his performance. This movie doesn’t shy away from the darker moments of Elton John’s life and Egerton embraces it head first.

While this film has been touted as a “musical fantasy,” it leaned more heavily into the “fantasy” part than I expected. Montage-like sequences, often coupled with an Elton John hit, were used to move the story along. These sequences didn’t explicitly explain what was going on but rather implied it. At first I thought these were just ways to inject Elton John’s songs into the film. Not until after the montage finished and the next scene began did I realize the story was moving along during the previous sequence. It’s a rather unique implementation of a non-unique story-telling device.

When going into a biopic about a musician, you can expect their songs to be featured heavily. Rocketman did just that but the way it did it was interesting. Instead of being a movie with music like I was anticipating, it was more like a musical, with the characters breaking into song at random points. As different as this was, there were times it felt forced, with songs being used at weird times to make sure the film includes all of Elton John’s biggest hits. Sometimes only a few lyrics were used from a song making it feel more awkward. While I liked the approach, the execution was spotty.

I thought Rocketman was GOOD 🙂 Not knowing much about Elton John’s life, I can’t say how historically accurate it is. However, what I can say is that it lives up to its label of “musical fantasy.” A stand-out performance from Taron Egerton and unique musical sequences make this biopic rock to new heights.