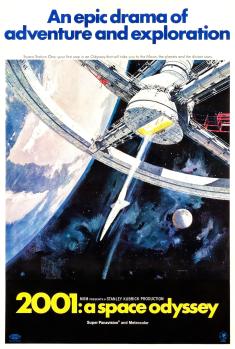 Synopsis
After discovering a mysterious artifact buried beneath the Lunar surface, mankind sets off on a quest to find its origins with help from intelligent supercomputer HAL. 9000. (via IMDb)

Review
Let me preface this review by stating the science-fiction genre is one of my favorite film genres. They can tell a variety of stories that speak of optimism for the future, serve as warnings for humanity’s destiny, or provide simple popcorn entertainment with cool visuals and an exciting story. Now, with that said, do you want to hear my unpopular opinion? Here it is: I don’t particularly care for 2001: A Space Odyssey. Before you stop reading because of my blasphemous statement, let me say that I do see why others hold it in such a high regard; I do appreciate the influence and historical significance this film had on not just in the science-fiction genre in cinema but in the industry as a whole; I do understand the imagery and allegories presented in this film. I enjoyed director Stanley Kubrick’s use of classical music as opposed to a traditional score. I felt the cinematography is one of the best in the genre, with beautiful wide shots and vibrant colors throughout. Its comments on technology’s influence in humanity’s past, present, and future and its comments on humanity’s origins are presented in a thought provoking way that deserves the exploration and dissection it has received over the decades.

With all that said, I didn’t feel entertained for most of the film. The beautiful cinematography I mentioned contained a lot of shots of nothing or lasted way longer than necessary. 2001: A Space Odyssey could probably lose 40 minutes off its run time and it would still get its themes across but without feeling like it is dragging on. There is so much to enjoy in this film but with all the extra stuffing around it, it took me out of the experience. Maybe some like the expansiveness of it but for me they just don’t work.

I thought 2001: A Space Odyssey was OK 😐 I get that this is a very unpopular opinion but I can live with that. When I watch a film, I want to be entertained. This film has entertaining moments but they are interspersed with glacial pacing. The provocative and deep themes presented are worth thinking about but the presentation was not engaging for me. I’ve heard several people say that they got more out of Stanley Kubrick’s crown jewel during subsequent viewings. Maybe I’ll revisit this film again sometime down the line and see if my views change. Until then, I’ll maintain my sacrilegious position.