Welcome to the halfway point of the eighth annual Christmas in July Blogathon! Today’s entry comes from none other than the most enthusiastic participant of the blogathon, Allie from Often Off Topic! On her site, Allie shares movie reviews and life updates. Check out her blog for all sorts of goodies. For this year’s blogathon, Allie returns to her reviewing roots with a review of 2011’s Arthur Christmas.

In previous years I’ve made lists, drawn posters and generally tried to think outside of the box. But this year I’m keeping it simple and I’m bringing you a movie review of Arthur Christmas (2011). It’s a movie I’ve never seen before but it’s been on my watchlist for 5 years now. I know it’s something I would enjoy but once November/Winter comes around, there’s so much going on and there’s so many beloved movies to watch that I’ve never found the time for something new. I’ll always pick an old favourite like National Lampoon’s Christmas Vacation (1989) or Jingle All The Way (1996) before I take a risk on something new. So the blogathon was the perfect opportunity for me to watch Arthur Christmas and see if it’s worth it.

Arthur Christmas is an animated movie made in collaboration with Sony Pictures Animation and Aardman Animations. If I’d known all along that Aardman was involved I would have seen it immediately, you can always rely on them to pack in a ridiculous amount of detail into their work. The animation is a beautiful blend of claymation meeting digital, it’s nothing that stands out against today’s animations but it’s still gorgeous.

It also has a wonderful voice cast. James McAvoy plays Arthur, one of Santa’s sons who works in the post room and has so much passion for making Christmas perfect for each child. He reads every letter and always makes sure the children get exactly what they ask for. Hugh Laurie voices Steve, Santa’s other son and heir to the suit. Steve’s worked hard to modernise the night of Christmas Eve with technology and efficiency, but he cares more for numbers and stats than the magic of it all. Santa himself and his wife are voiced by Jim Broadbent and Imelda Staunton. I’m sure they’ve done so much more but they will always be Slughorn and Umbridge to me.

Arthur Christmas is, I guess, a very to-the-book Christmas movie whereby Christmas is in danger of being ruined and it’s up to the underdogs to save it. I don’t have a problem with that as long as it’s done well and Arthur Christmas absolutely smashes it. The best Christmas movies are those that can be enjoyed by children and adults alike and this is one of them. It’s the subtle jokes like the elves delivering presents and switching the oven on because the adults had forgotten after putting the turkey in before bed. That’s just one very small example off the top of my head. 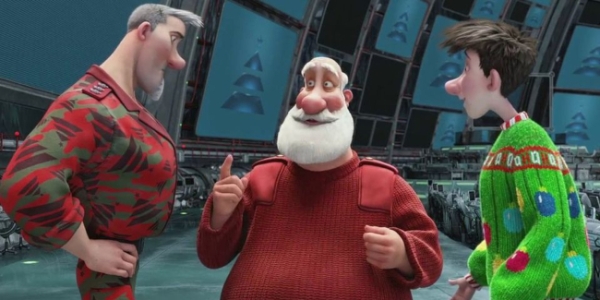 If I had any complaint at all it would be this question. Did the people involved in making this movie have young children AT ALL? Find me a child still asleep on Christmas morning past 7am and I’ll eat the laptop I’ve been using to work from home with. By 7am the presents are already opened and the house is chaos!

But anyway – in conclusion, Arthur Christmas will 100% be re-watched many a time in my house, when the real Christmas is here.

Now, my favourite part of Drew’s blogathon is the party he hosts at the end of it. We all get to bring a guest of our choice, someone we’d like to meet under the mistletoe. I’ve been very fickle and brought a new guest every year and 2021 is going to be no different. There’s only one person on my naughty list this year and the god of mischief himself, Loki, aka Tom Hiddleston. Drew, if we’re allowed to come in costume I’ll put together my very best Sylvie outfit!

I would love to see you in a Sylvie outfit, Allie. 😉

Tomorrow, the blogathon’s longest running participant joins in the fun.