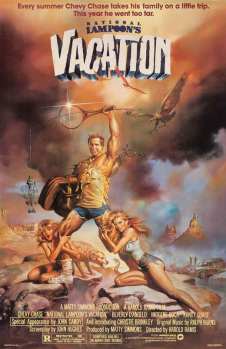 Review
The 80s was a great time for actor Chevy Chase and writer John Hughes. Given the long and storied careers these two would end up with, then of course it is no surprise that when these two collided almost 40 years ago, magic happened. Hughes based the script for National Lampoon’s Vacation on the short story “Vacation ’58” he wrote for an issue of the National Lampoon magazine. Chase, combined with an incredible cast around him and director Harold Ramis behind the camera, creates one of the most memorable films of the decade.

The first thing that makes this movie so entertaining are the actors; every one of the Griswolds is perfectly cast. Chevy Chase as the head of the family, Clark Griswold, never fails to elicit laughs. His deadpan delivery and slapstick comedy are timed perfectly. Beverly D’Angelo as Ellen, the Griswold matriarch, is fantastic opposite Chase; she plays off his comedy well and shines just as bright. The Griswold children, Anthony Michael Hall as the older sibling Rusty and Dana Barron as Audrey, the younger sibling, are just kind of there to go along for the ride. Hall seems to have the more stand-out moments than Barron but they both gel well with Chase and D’Angelo.

Chase, D’Angelo, and the rest of the cast wouldn’t stand out if it wasn’t for the excellent script they had to play with. This film is filled to the brim with wit and humor. I don’t think there was one scene that did not make me laugh, whether it was Clark’s antics or obliviousness, Ellen trying to keep her children and husband in line, or the Griswold children just going along with everything as best they can, there are jokes and gags galore. It gets even better when Randy Quaid as Cousin Eddie shows up, albeit too briefly. Hughes’ script is also very tight. Every scene has a purpose or sets up something that pays off down the line. It also keeps moving; with the amount of jokes and gags in each scene, the film never lingers on any one of them, constantly moving on to the next. This is what makes Chase such a wonderful fit because he expertly navigates from one gag to the next.

But what I really enjoy about this film is how it takes something simple, such as a family vacation, and turns it into a caricature. Something simple like asking for directions or visiting a cousin’s house is exaggerated and portrayed in a ridiculously over-the-top manner. Countless times I found myself laughing and saying to myself “I can relate to that!” The best movies find something for you to connect to, building an emotional bond between you and the film. Vacation finds those emotions and holds on tight, making sure you remember the film long after you’ve finished watching.

I thought National Lampoon’s Vacation was GREAT 😀 Really, what’s not to love in this film? Director Harold Ramis, aka Dr. Egon Spengler, brings writer John Hughes’ script to life with energy and nuance, highlighting the comedic talents of Chevy Chase and Beverly D’Angelo. Randy Quaid is a hoot as Cousin Eddie, who has only a small role in this film but thankfully plays a bigger part later in the franchise. Vacation hits all the right emotional cords with its melodramatic take on the family road trip, drawing you in with its fun and relatable characters and keeping you engaged with Hughes’ trademark humor and heart.

Favorite Quote
Lasky: Has your father ever killed anyone before?
Rusty: Oh, just a dog. Oh, and my Aunt Edna.
Clark: Hey! You can’t prove that, Rusty.

Merry Christmas in July! We are just six months away from the actual Christmas day! I know several of you (especially Allie) have already been counting down the days.  To close out this years Christmas in July Blogathon, I am reviewing one of my all time favorite Christmas flicks: A Christmas Story. 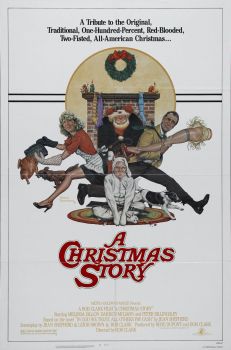 Synopsis
Ralphie (Peter Billingsley) wants a Red Rider carbine action 200-shot range model BB gun more than anything for Christmas. He tries to convince his mother, his teacher, and even Santa Claus that it would be a good present. However, each of them give him the same warning: “You’ll shoot your eye out.”

Review
Among the many things to look forward to on Christmas Eve, one of my favorite is the 24 Hours of A Christmas Story on TBS. I don’t usually catch it all at once but within those 24 hours I will watch the entire movie in bits and pieces. Despite all the films that I call holiday “must watches,” A Christmas Story is my most consistent of holiday movie traditions.

Sometimes movies can get caught up in themselves, trying to tell too much or too many stories. A Christmas Story has several sub-plots. Despite this being Ralphie’s story, we learn about his entire family and they get just as fleshed out as he does. However, they never take away from Ralphie’s journey to get his Red Rider BB gun. That’s one of the key to its success. The film is simple and stays focused on the story it is trying to tell.

Like I said, everyone gets at least some sort of plot line. As a result, we get to see different aspects of everyone. It is so much fun to watch Ralphie’s family because each member has their own unique personality. The best is when they get to play off each other, particularly Ralphie’s parents.

Several of my favorite parts from the movie are Ralphie’s daydreams. We did it all the time when we were younger, maybe even still do today, so I think we can all relate. And the best part is that we get to see his imagination. The mind of a child views the world in a different lens and this film captures that perfectly.

A Christmas Story has so much going for it, but what makes this movie so enjoyable is that deep down, it transports the audience back to their childhood. Ralphie being a kid during the Christmas season, wanting and hoping for that one present that will make your holiday the best ever, is something that many adults can relate to. It not only captures what it means to be a kid during the holiday season, but the captured the ups and downs of being a child.

I thought A Christmas Story was GREAT :-D. It perfectly captures the Christmas spirit and being a kid, not just during the holiday season but every day of the year. There is a reason there is a whole 24 hours set aside just for this movie and it is not hard to see why.

Favorite Quote
Ralphie: [Drops the tire nuts into the snow] Oh, fudge.
Adult Ralphie: Only I didn’t say “fudge.” I said the word. The big one. The queen mother of dirty words. The f-dash-dash-dash word.

What’s that? Who did I invite to our Christmas party?  Well, I’m glad you asked, because it is none other than the lovely Emma Stone.

And that’s it! The third annual Christmas in July Blogathon has come to a close. Thank you to everyone who joined in on the festivities.

If you missed any of the entries, the wrap-up with links to all the entries will be posted soon. Also later today, my Anniversary Week 3 celebration kicks off so stop back later to check that out.