Today’s guest is the movie review monster Rob, of MovieRob. Rob has reviewed literally thousands of films on his blog. If you’ve never read any of them before, where have you been!? Also, Rob’s podcast, MovieRob Minute, will be starting season 2 February 28th with Planes, Trains and Automobiles. Be sure to give that a listen as well. Now, as for this entry in this blogathon, Rob is reviewing one of cinema’s landmark and earliest science-fiction films. Taking us way back to 1902, here is Rob’s review of A Trip to the Moon. 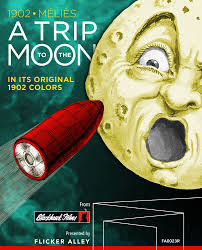 Brief Synopsis – A group of scientists build a rocket ship in order to visit and explore the Moon.

My Take on it – This is a film that I knew so much about before I finally got around to watching it for the first time nearly 7 years ago.

The first time that I was exposed to this film was in the Mini-Series From the Earth to The Moon (1998) since one of the episodes of that series (the final one actually) depicts how the dream of Georges Melies was realized as he was able to create a story with great special effects that could help transport the viewer to the Moon itself through the new medium of Motion Pictures.

More than a decade later, I saw other parts of the story expanded on in Hugo (2011) which helps me get an even better understanding of the genius of Melies at a time when no one knew how to create the wondrous effects like he did.

Since then, I have really enjoyed the films of Melies and this is among my favorites of his eclectic and mindblowing short films that were so groundbreaking when filmed and released at the end of the 19th Century and the beginning of the 20th.

When Kim and Drew announced this years blogathon, I eagerly was interested in revisited this film and since it fit in so perfectly with the theme of a film that was released during a ‘2’ year, I decided to use it as my entry.

The way that Melies created movie magic back in a day when it was unheard of is so amazing to me.

Every aspect of film making is visible in this movie and one must always take into consideration that at the time this was made, there wasn’t many known techniques to create this kind of film and Melies and his crew needed to make things up as they went along.

The story is great and through effects, they help take the viewer to a far off place so vividly despite the simplicity of the way it all looks 120 years later.

The set design, the costumes, the props, the special effects and the ideas presented here are great to watch and despite only being 13+ minutes long, this film is truly captivated from beginning to end.

This film is a milestone in movie making history and the fact that it still stands up after 120 years says so much about the talent of Melies who’s ideas and vision were used as a springboard for thousands upon thousands of films that would come in the century plus since this was made.

MovieRob’s Favorite Trivia – By the end of 2021, this film will actually be sent to the moon. On the first commercial lunar flight, it will be attached to the Peregrine mission, which will stay forever on the moon. It will be stored on a micro SD card and protected in a cone-shaped sealed aluminum capsule, together with 1000 other cinema classics, selected by the VLC team. (From IMDB)

Here is a link to my movie index A-Z