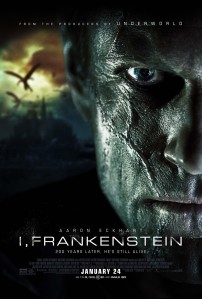 Synopsis
Frankenstein’s Monster (Aaron Eckhart) has survived in seclusion for over 200 years after he was brought to life by Victor Frankenstein (Aden Young). Now he finds himself caught in the middle of a centuries-old battle between the Gargoyles, led by Lenore (Miranda Otto), and the Demon Prince Naberius (Bill Nighty) and his Demon horde. With the help of the scientist Terra Wade (Yvonne Strahovski), he seeks to learn about his origins and why Naberius is after him.

Review
When I went into the theater to see I, Frankenstein, I didn’t have very high expectations. Which I suppose was a good thing so at least when I left the theater, I wasn’t too disappointed. Pretty much the only thing this movie has going for it are the action and visuals, which look amazing. The story didn’t do anything to pull you in or make you care about the characters. One of its biggest drawbacks is it takes itself too seriously and has trouble enjoying itself for being a simple fantasy-action film. I, Frankenstein feels a lot like Underworld, both in tone and story (although this isn’t really a surprise since the writer, Kevin Grevioux, was also one of the story writers for Underworld). I just feel like I have seen the “someone caught in the middle of an unknown, centuries long battle” schtick before and with better execution. At least this movie moves along quickly so you don’t have time to dwell on its shortcomings. Sometimes a movie’s cheesiness is its strength, but not it the case of I, Frankenstein; Its great special effects aren’t enough to make up for the lackluster story and character development.

Synopsis
One year after Bruce Wayne (Christian Bale) started fighting Gotham City’s criminal underworld as Batman, a new menace has surfaced. The Joker (Heath Ledger) is bent on spreading chaos throughout the city. Working with Lieutenant Jim Gordon (Gary Oldman) and the new district attorney, Harvey Dent (Aaron Eckhart), Batman must bring down the Joker before he brings all of Gotham to its knees.

Review
Batman Begins gave us a strong Batman origin story. The casting was spot-on, the story was great, and the characters were well fleshed out. All of these aspects carry over into The Dark Knight and add some new cast members that are just as on-point as the returning cast. The Dark Knight is darker and grittier than its predecessor, and triumphs not just as a great superhero film, but as a cinematic masterpiece.

Heath Ledger received a ton of flack when he was announced as the Joker in The Dark Knight. Now it’s hard to envision anyone else in the role. Ledger completely embodied the Joker, from his voice to the character’s mannerisms, including freaky body twitches and lip licking. It looks like the Joker is barely on the edge of maintaining his sanity, and it’s all feels real. This is without a doubt my favorite portrayal of the character.

One noticeable difference is Rachael Dawes is played by Maggie Gyllenhaal this time around, instead of Katie Holmes. Holmes turned down the role due to scheduling conflicts with Mad Money. As I said in my Batman Begins review, Holmes wasn’t awful, her performance just wasn’t as strong as the cast around her. Gyllenhaal, on the other hand, has no problem standing toe-to-toe with the likes of Bale, Ledger, and Michael Cane. She also does well bring across the emotion necessary for some of her more dramatic moments. As much as I don’t like to see cast changes in the middle of franchises, this one was probably for the better.

We didn’t get to see much of the detective part of the “World’s Greatest Detective” in Batman Begins, but we do this outing. Wayne uses his skills and resources to find the Joker’s hideout. It was only a few, short sequences, but it was nice they acknowledged that side of Batman since often it’s neglected in favor of action.

The Dark Knight has a long running time, but it doesn’t feel like it at all. Part of the long running time is due to the focus on two villains. Unlike most movies that try to focus on more than one antagonist, this film does not feel claustrophobic. It does extremely well balancing both Joker and Two-Face, who comes in about halfway through the movie. Although it is two and a half hours, it moves along at a quick pace, while still developing the character of Bruce Wayne and the supporting cast.

Not only is The Dark Knight one of my favorite comic book movies, but it is one of my favorites of all time. With superb casting, great balance of characters and character development, not to mention great action, it is hard not to love this movie.

Synopsis (from video description): 200 years after his shocking creation, Dr. Frankenstein’s creature, Adam, still walks the earth. But when he finds himself in the middle of a war over the fate of humanity, Adam discovers he holds the key that could destroy humankind.

I’m kind of iffy on this one. It looks like Frankenstein’s Monster has become some sort of monster hunter himself, almost a Van Helsing feel to him. Kind of an interesting turn of fate, I guess, that could be an interesting twist on the character. I get an Underworld vibe about the film, but it is comes from one of the co-writers of that movie, so I guess that is to be expected.