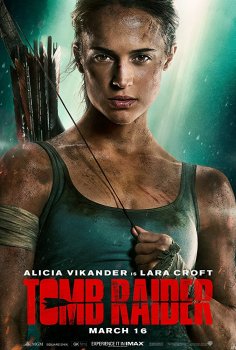 Review
Mentioning a film is a video game adaptation is often met with a moan and a groan. While some are a few diamonds in the rough, most are OK at best, if not downright dreadful. Going into the theater to see Tomb Raider, I was cautious but at the same time hopeful. The Angelina Jolie take on the character was fun and I really liked what I saw in the trailers. It helped, too, that I’ve heard a lot of good things about the 2013 Tomb Raider game reboot (which this is what this film is based on). Leaving the theater, I was actually optimistic about the future of an Alicia Vikander-led Tomb Raider series.

One thing this movie is not lacking in is adventure. From start to finish, Lara is zooming from one place to another, running from something or fighting someone. Not exactly edge-of-your-seat stuff but it was exciting. There was an Indiana Jones and the Last Crusade or National Treasure element to it so of course I was going to enjoy it. Even when the film was between action pieces, it kept your attention, moving Lara towards the end goal.

My mom watched this with me and when it was over I asked her if she liked it. Her response was “Yeah, it was easy to follow.” The plot wasn’t overly complicated. Nothing felt extraneous or unnecessary. There were no extra side-plots, nor any crazy twists or turns. Every scene had one goal: getting Lara to the tomb. There are clear breadcrumbs laid to be picked up in potential future sequels but they do not take away from this film. This is the correct way to start a film franchise.

Lara Croft is an iconic video game character. Portraying a character who is beloved by so many can be intimidating. Luckily, Alicia Vikander is up to the task. She was fantastic as a younger, less experienced Lara. She nails the look of Lara’s most recent incarnation to a tee. And the muscle she put on for the role is remarkable. It really help sells that Lara would be able to pull the crazy stunts she does, no matter how improbable they may seem. In the same vein of films like John Wick, she, despite being the hero, isn’t invincible; She constantly is getting beat and bruised but continuously finds a way use her brain and skills to come out on top. Vikander performed many of her own stunts, clearly showing a love and dedication to the role that comes across on screen.

It seems lately Hollywood has been moving away from making women in film damsels-in-distress or helpless love interests. Instead, we are seeing more bad-ass and kick-ass heroines than ever before. The beating Lara endures throughout the movie is what you would expect from an 80s action hero. It’s over-the-top, insane, gritty, and quite frankly, unbelievable but oh-so enjoyable to watch and root for. I can’t think of many films where the lead role is a woman and can be comparable to an Arnold Schwarzenegger, Kurt Russel, or Sylvester Stallone role. If that’s not progress I don’t know what is.

I thought Tomb Raider was GOOD 🙂 Director Roar Uthaug not only managed to make a decent video game movie, but a decent adventure movie as well. While it was mostly unoriginal as an adventure movie, pulling inspiration from many successful adventure films, and generic, it was generic fun. And really, fun is all I ask for.