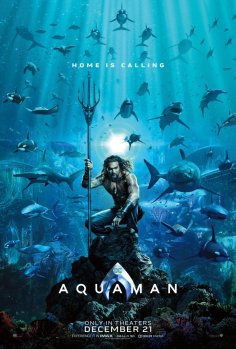 Synopsis
Arthur Curry (Jason Momoa) is a son of both the land and the sea. When his Atlantean half-brother Orm (Patrick Wilson) threatens to go to war with the surface world, Arthur, along with the help of Mera (Amber Heard) and Vulko (Willem Dafoe), searches for a mythical trident that can help him defeat his brother and prevent all-out war.

Review
Let’s be honest, the DC Extended Universe (DCEU) has not gone well. Excluding Wonder Woman, the movies in the franchise have been mediocre at best and downright awful at worst. Aquaman hopes to land more towards Wonder Woman rather than Batman v Superman: Dawn of Justice. After a mostly successful appearance in Justice League, Arthur Curry, aka Aquaman gets his own adventure that mostly hits the mark.

Aquaman is a somewhat unique film in that a good chunk of the movie takes place underwater with the characters interacting with each other like they would above water. I don’t know how the effects artists accomplished it but it was believable that the scenes were actually taking place underwater. They way the characters moved around and how things like hair and clothing articles waved around was just like you would expect underwater. I felt like I was right there in the ocean.

Besides the underwater features, the rest of the visual effects were simply stunning. There were many beautiful colors, especially when it came to underwater sea creatures, ocean floors and many of the Atlantean cities. It was all very vivid and beautiful. All the different creatures were well done also. Towards the end there was a giant battle that was reminiscent of something from the Hobbit movies. While the scene itself was chaotic and difficult to follow at times, the creatures and characters looked good.

The humor from this film approached its humor the same way Wonder Woman approached its humor. It doesn’t try to emulate the Marvel Cinematic Universe’s sense of humor with one-liners galore and every character trying to be funny. Instead, most of the humor comes from Arthur (Jason Momoa) and Mera (Amber Heard). They aren’t always laugh-out-loud funny. Instead, they have a subtle humor that got me to chuckle numerous times.

Part of the reason these gags worked so well was because the film had superb casting. Momoa was fantastic as Aquaman. He did a great job being both funny and dramatic. Heard played off of Momoa very well and even stole many of her scenes. She proved that she was often more capable that the hero that carries the movie’s name. Willem Dafoe has perfected the villainous and mentor roles and he is the latter in this movie. The biggest surprise was Yahya Abdul-Mateen II as Black Manta. He didn’t get much screen time and his face was covered for much of it but he was phenomenal. I hope he has an expanded role if there is a sequel.

This film’s story is a familiar one: the main hero is an estranged heir to the throne, some family member is ruler and is trying to start a conflict so the hero must claim his rightful place to prevent catastrophe. Many movies have done this story before and many have done it better. This creates a very predictable story. While this might bother some, I think there are other aspects of the film that makes up for its predictability.

Like many superhero movies, the villains are one of the weakest elements of this film. As I said, Orm’s (Patrick Wilson) story is nothing new and fits all the molds of an evil king trying to take over. Wilson does the best he can with the part but the script isn’t there to support him. Abdul-Mateen’s Black Manta actually has a more interesting story and reason to be fighting Aquaman but he has such a small part this film it’s criminal. He is clearly being set up for the future and as a result he just ends up feels wasted here.

I thought Aquaman was GOOD 🙂 Much of my enjoyment came down to the casting and action and effects. Unfortunately, the script didn’t do any favors to the villains, with the main baddie feeling generic and the more compelling one getting very little screen time in a clear attempt to build him for the sequel. The DC Extended Universe has had a rough start. However, gems like Wonder Woman and now Aquaman show that there is hope yet for the struggling franchise.