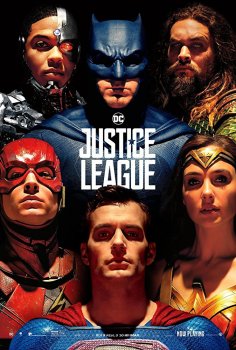 Synopsis
Batman (Ben Affleck) discovers that an alien invasion of Earth is imminent after the death of Superman (Henry Cavill). In order to combat the coming threat, he tries to bring together several of the world’s superheroes, including Wonder Woman (Gal Gadot), the Flash (Ezra Miller), Aquaman (Jason Mamoa), and Cyborg (Ray Fisher).

Review
I have made no effort to hide my favoritism of the Marvel superhero characters over the DC ones. However, I do enjoy both studios and both have some great stories to tell. Ever since The Avengers, DC has tried to play catch up to get their Justice League on screen. With the exception of Wonder Woman, the films of the DC Extended Universe (DCEU) so far have been less than enjoyable. So how did Justice League, the long-awaited big team up fare? Better than the sum of its parts, apparently.

Zack Snyder had to step away from directing duties for a while due to a family tragedy, so Joss Whedon stepped in to take over. Many were worried, including myself, that while he has a good sense of what makes a good team-up, he might take too much away from Snyder’s Justice League (for better or worse). I think it is safe to say that Snyder and Whedon have two very different directing styles and it is very apparent throughout the film. Whedon added a nice layer of humor throughout the movie that wasn’t too overpowering, like some of the Marvel Cinematic Universe (MCU) films can be these days, but it wasn’t a one-off thing either. Man of Steel and Batman v Superman: Dawn of Justice (both directed by Snyder) were very dark and broody, way more than they should have been. While this film isn’t bright and cheerful, there is still a level of levity to keep the apocalyptic story from hitting Dawn of Justice level of gloominess. It looks to me that Whedon respected Snyder’s vision for the film but still put his signature stamp on it.

This movie is the first time we are seeing the Flash (besides a small cameo in Suicide Squad), Aquaman, and Cyborg. I really enjoyed all three new characters and who were cast in the roles. Ezra Miller as the Flash brought a great comedic relief to the film. He is a very different version of the Flash in the Arrow-verse. Aquaman, played by Jason Mamoa, didn’t want anything to do with anything and wanted to be left alone. Oh, and is apparently an alcoholic. He had my second favorite arc of the new characters of becoming less antipathetic as he works with the other members of the League, culminating in a great gag with Wonder Woman’s lasso of truth. Ray Fisher’s Cyborg has the most growth out of all of them, boasting maybe the most unique power set of the group. He initially sees his powers as a curse but eventually accepts them and gives some great moments during the final, no holds barred action sequence.

As I just mentioned, this is the first time several of the League members are being introduced. Normally, these ensemble movies feel way too long, focusing on only a few of the characters and not developing the rest cough Suicide Squad cough. This time, it actually had the opposite problem: it should have been longer! For obvious reasons, Batman (Ben Affleck) and Wonder Woman (Gal Gadot) had the two biggest roles in the movie. However, it still did a good job of balancing everybody, especially given three of the characters needed to be introduced. But there was still room for some more development of the new characters. I appreciate that the editors wanted to keep Justice League relatively short but I think in doing so, they only gave the bare minimum motivations we needed from these heroes. There is plenty of room for more.

While I don’t necessarily agree with DC’s approach to rush into a film about their superhero team-up group, I don’t necessarily think an origin movie was needed for every character beforehand. Yes, it definitely would have helped the audience connect with them but other ensemble movie’s have gone this route with moderate to great success. One that is coming to mind is the animated Justice League: War which boasts a similar story with the same characters. Another is Guardians of the Galaxy. Don’t get me wrong, Justice League is nowhere near as good as Guardians but my point is that it brought a team together without any prior knowledge of the characters the same way this movie does and the only reason that this is an issue is because these are well known characters and is comparable to The Avengers.

A common gripe in modern superhero films are the weak and flat villain. To bring Guardians back into the mix, I didn’t have a problem with Ronin being one-dimensional because his purpose was to bring the titular group together. Steppenwolf serves essentially the same purpose as Ronin only this time I was very disappointed. Other than “he wants to shape the Earth in his image,” he is given very little development. This is doubly disappointing given what, or rather who, he is the precursor for. Darkseid (pronounced “dark side”) is one of the Justice Leagues greatest and signature villains, often fighting on par with even Superman. There was very little hint towards any of this except for one line that only those who are familiar with the characters would pick up on. Steppenwolf is an integral part of what’s to come but it’s hard to see that given how poorly he was treated in this film.

I thought Justice League was GOOD 🙂 Not devoid of problems, it still offers a good time. A shallower-than-normal villain is really the biggest complaint from me, especially given the character’s importance. The new characters were fun and unique and meshed well with the previously established characters. I wouldn’t mind seeing a Zack Snyder Director’s Cut of the film to see how much Joss Whedon’s reshoots changed the final product or to get more character development. Overall, this is the best I could have expected from the mostly disappointing DCEU so far.

This review was originally posted by Table Nine Mutant as part of her IMDB Top 250 event.

Synopsis
Will Hunting (Matt Damon) is a mathematical genius but has no direction in his life. He gets recognized by Professor Gerald Lambeau (Stellan Skarsgard) who enlists help from psychologist Sean Maguire (Robin Williams). With assistance from Sean, Will begins to get his life together.

Review
To be upfront, this was my first time watching Good Will Hunting. Shocking, I know. It was one of those movies that I kept hearing and hearing about but never really got around to watching. But thanks to the wonderful Ms. Mutant, I thought her IMDB blogathon would be the perfect time to check it out. And I must say, it is as every bit as wonderful as it was made out to be.

At the center of attention is the late Robin Williams. He is not the center of the movie but Sean Maguire is at the center of discussion whenever this film is brought up. Williams won an oscar for best supporting actor for his role and, boy, was it well deserved. Looking back Williams’ filmography, I haven’t seen many of his more serious roles. After watching this, I really need to change that. He hit with such an emotion I haven’t seen from him before. Just one more reminder how phenominal of an actor he was and his versatility to take on any role.

Matt Damon as the titular Will Hunting and Ben Affleck as his friend Chuckie Sullivan were great on screen together. It was easy to feel their connection and friendship. This even extended to the minor characters in the gang. Their camaraderie bleed through the screen and seemed so natural that I wouldn’t be surprised if they are all best friends off the screen.

For me, character-driven movies are always the hardest for me to review because with action flicks, comedy films, or horrors, there are other factors I can look at. But with dramas, it simply comes down to the actors. It’s the little moments they bring to life and make them feel genuine that make or break the film. When actors or actresses make you feel what they feel and seem so realistic and sincere, that is the sign of a great drama. Every single member of the cast manages to pour their heart and soul into the film and it is palpable. Add that to an excellent script from Matt Damon and Ben Affleck and you have nothing short of success.

Good Will Hunting is a heartfelt film that manages to shine thanks to a well-penned script and great performances from Matt Damon, Robin Williams, Ben Affleck and the entire crew.

Not surprisingly, Warner Bros. and DC has confirmed they have more movies planned besides the upcoming Man of Steel sequel.

Right now they are playing catch-up to Marvel and their cinematic universe, using Man of Steel as a springboard to kick of their movie universe.  Personally, I think they should use television to introduce their characters, then use the movies to bring them together, whether it be pairings or a full fledged Justice League movie.  DC has had success on the small screen in the past with shows like the 1970s Wonder Woman, 2000s Smallville, and the recent Arrow.  A Flash series is already set to spin-off from Arrow, introducing super powers into the series.  The grounded atmosphere of Arrow is similar to the feel of Man of Steel and I’m assuming in other films going forward, too.  It wouldn’t be that much of a stretch to make Arrow, The Flash (or whatever the series may be called), and Man of Steel in a shared cinematic universe, to steal Marvel’s terminology.  DC can play to their strengths and use the small screen to their advantage.

Also, interestingly, Tsujihara uses “Batman Vs. Superman” rather than “Man of Steel 2” or “Man of Steel sequel.”  Granted, Batman Vs Superman has been the placeholder title until one is officially confirmed, but could this be that confirmation?

Man of Steel 2 is scheduled to be released in theaters July 17, 2015, directed by Zack Snyder with Henry Cavill reprising his role as Clark Kent/Superman and introducing Ben Affleck as Bruce Wayne/Batman.

So as I’m sure many of you have heard by now (it’s all over the web), Ben Affleck will be playing Bruce Wayne/Batman in the Man of Steel sequel.

My initial reaction was “Really? Affleck?”  Affleck played the titular character in Daredevil, which most are still trying to forget.  I can see him playing Bruce without a problem, but I’m not sure about Batman.  However, I try to keep an open mind about such news.  Who knows, maybe he will be terrific in the role.  Newsarama thinks casting Affleck as the caped crusader is a brilliant choice by WB.  As IGN pointed out, Heath Ledger got similar backlash when it was announced he was going the be the Joker in The Dark Knight.  Look how that turned out.

In the end, Warner Bros. is going to do whatever they want and we will just have to roll with the punches.  As fans, we can only hope for the best.  Man of Steel 2 is scheduled to be released in theaters July 17, 2015.