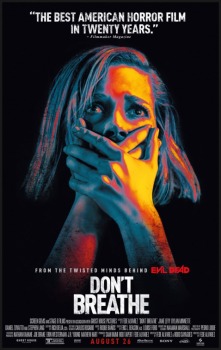 Synopsis
Three burglars, Money (Daniel Zovatto), Alex (Dylan Minnette) and Rocky (Jane Levy), learn of a man who is sitting on a large sum of money. When they break into his house, they realize the job won’t be as simple as they thought.

Review
Back in the day, I would have avoided any movie that was remotely horror. In recent years, I have found a few sub-genres of horrors that I will watch. Even today, I’m still a little bit hesitant about watching anything that is considered “horror.” And I will admit the only reason I was interested in seeing Don’t Breathe was because it starred Jane Levy, one of my current favorite actresses, and Stephen Lang, the best thing from the underrated TV series Terra Nova. I’m glad that I decided to go outside my comfort zone and give this film a shot, otherwise I would have missed one hell of a thrilling ride.

Fede Alvarez proves that he knows what he is doing when it comes to manipulating the atmosphere of a film. With the exception of a few scenes, the majority of the movie takes place inside one house. Alvarez uses this small space to add an hint of claustrophobia to his film. Throughout the film, I was constantly on the edge of my seat from the suspense. Between feeling the characters had no escape and the Blind Man being a physical and commanding threat, my heart was constantly pounding. Every time something happened, I thought “That just happened! What’s next?” Then the movie stepped it up. And this happened over and over. It did a great job building suspense as the film went on and never fizzled.

As I said, the Blind Man’s house was the primary setting of Don’t Breathe and the cinematography made great use of the relatively small space. Every shot was deliberate and provided you with just enough scope to see what you needed but nothing else. When the burglars first enter the house, there is one moment when the camera is panning back and forth between them throughout the house that is an absolutely great piece of camera work. After that, I was hooked.

In suspense and horror films, great sound work can manipulate the audience. Sometimes, a lack of music can be just as important as the music itself. Throughout Don’t Breathe, there were moments when the music stopped and all you could hear were the floor creaks and/or the characters breathing. In these moments, my heart was beating the fastest and I was furthest on the edge of my seat. Then when it was most impactful, the music returned and built on the moments when it was missing. This is a superb example of how great sound work positively affects a film.

I thought Don’t Breathe was GREAT :-D. The entire film I could feel my chest tighten from the suspense and was taken in by the great cinematography and sound work. Don’t Breathe offers one gut-wrenching moment after another and I couldn’t help but want to see what happens next.

The Sea of Trees

Rogue One: A Star Wars Story

War On Everyone UK trailer

The Light Between Oceans