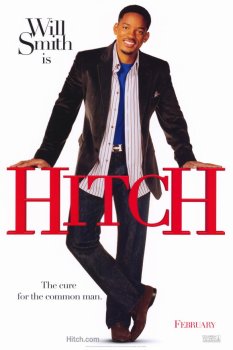 Synopsis
Albert (Kevin James) is an accountant who falls for his client, Allegra (Amber Valletta). For Help, he calls Hitch (Will Smith), better known as the Love Doctor. But when Hitch meets Sara (Eva Mendes), the girl of his dreams, he must take his own advice to make her him fall for him, too.

Review
Romantic comedies are a mixed bag for me. I prefer them more on the comedic side than the romantic side. Hitch finds a good mix between the two. A lot of its enjoyment comes from the chemistry between Will Smith and Kevin James. Whenever they are on screen together, I am laughing. Eva Mendes is good as the love interest but, whether it was planned or not, she doesn’t have as many laugh out loud moments as the other leads. Although endings of romantic comedies are fairly predictable, this film did a good job about throwing in a few twists and turns along the way. Not necessarily with big or movie changing moments but more with the smaller ones and how they played out. I found myself enjoying the first half of the movie more than the second half, when it is still exploring who the characters were, before the required conflict hits the two love interests. Hitch is a film with a lot of heart and good chemistry between its leads. Although it’s not perfect, it is a refreshing take on the traditional rom-com. 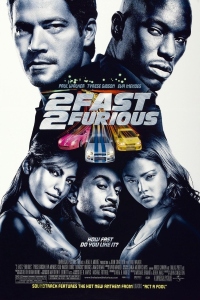 Synopsis
After the events of The Fast and the Furious, Brian O’Conner (Paul Walker) is on the run. He makes his way to Miami, where he makes friends with the street race organizer Tej (Ludacris), and fellow street racer Suki (Devon Aoki). Eventually, FBI Agent Bilkins (Thom Barry) finds and captures O’Conner and the two strike a deal: O’Conner must go back undercover and work with Customs agent Monica Fuentes (Eva Mendes) to bring down the drug lord Carter Verone (Cole Hauser) in exchange for a clean record. In order to give his cover credibility, O’Conner gets the help of his childhood friend, ex-convict Roman Pearce (Tyrese Gibson).

Review
My expectations for 2 Fast 2 Furious weren’t that high. The Fast and the Furious was a fun film, but it’s focus on cars and the racing underground didn’t seem like it had the power to garner a strong follow up. Unfortunately, I was right. The result was a movie that attempted to develop the character of Brian O’Conner, but threw out any idea of a plot for fast cars and fast action.

As with The Fast and the Furious, the main focus of this film are the cars. Once again, there is an abundance of gorgeous cars. And there is a greater diversity than before, too. Not only are there compact cars, but there also are pick-ups and classic American muscle cars. It was enjoyable to see more variety.

In terms of acting, The Fast and the Furious didn’t set the bar very high. But 2 Fast 2 Furious doesn’t improve any, either. Paul Walker seems like he is trying to fit in somewhere he doesn’t belong. I just doesn’t work. Tyrese Gibson and Eva Mendes do well, even actually help Walker seem less awkward, but their performances are nowhere near their best.

I would say my least favorite aspect about this movie is the dialogue. It probably played a part in my feelings towards Walker’s character. He dropped “cuz” and “bro” way too often to feel natural. Most of the conversations between characters feel like they were written by a teenager. Only b-list monster movies have worse dialogue.

There isn’t much of a plot. Rather, there is the illusion of a plot in order to show off the nice cars. This is more of a cop drama and a character study for Brian O’Conner than anything else. However, the lack of a solid plot undermines any character development this movie is trying to accomplish. At some points, the plot doesn’t even make sense. This is a perfect example that sometimes it is better if you don’t think about it very much, nod your head and just go with it. It’s not like this film tries to be clever anyway.

2 Fast 2 Furious is a sequel that was not really needed. They took a movie that understood what it was and tried to make a follow up that ended up with an identity crisis. Some nice cars and quick action aren’t enough to make up for the mess created by some poor acting and weak dialogue.