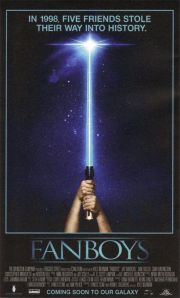 Synopsis
Four friends, Hutch (Dan Fogler), Windows (Jay Baruchel), Linus (Christopher George Marquette), and Eric (Sam Huntington), travel across the country to Skywalker Ranch to steal a rough cut of Star Wars: Episode I: The Phantom Menace before it is released in theaters.

Review
Fanboys is one of those movies that looks at a culture and dives headfirst. Star Wars, and really geek culture as a whole, is placed in the spotlight. I remember when The Phantom Menace first hit theaters in 1999 and how huge of an event it was, so I was looking forward to seeing a film centered around not the movie, but the release itself. Fanboys stumbles a few times, but offers a satisfying experience to Star Wars fanboys.

Since this is a farce centered around Star Wars, there are many, many references to the movies. Almost every scene there is at least some sort of reference to the movie, whether it is a direct quote or nod to the films. If you are a Star Wars fan or have at least seen the original trilogy, you will have a lot to enjoy. As a huge fan of the movies myself, I found it very rewarding. I’m sure if I watched it again I would find many references that I missed the first time around.

The road trip movie format allows for great cameo appearances, and Fanboys takes full advantage. There are several great cameos in the film relating to the Star Wars/science-fiction/cult films, including Danny Trejo, Seth Rogen, Joe Lo Truglio, Billy Dee Williams, Carrie Fisher, and William Shatner (who “can get anything.”). Shatners appearance was by far my favorite, but each one, particularly Fisher’s and William’s, were great nods to the fans.

So this movie takes place in the past (1998), it makes references to future events and opinions. It was pretty funny seeing Windows confident that his internet girlfriend looks exactly like how she described herself and Windows saying Harrison Ford cannot make a bad movie (referring to Indiana Jones and the Crystal Skull). It was one of the smaller things but it made the movie more enjoyable if you caught the remarks.

Parts of Fanboys feel really generic for a road trip movie. Several of the segments are unique, such as the groups stop in Iowa where they start a brawl with some Star Trek fans. But others, such as a high-speed chase, could have been a placed in another road trip movie and not seemed out of place. This movie was best when it was embracing its ridiculousness and culture.

The friends’ reason for their road trip is because Linus has cancer and his given four months to live while The Phantom Menace comes out in theaters in six. This subplot is glossed over for most of the film. And when it is brought up, it brings down the mood. Apparently, the cancer subplot was a huge deal for viewers. I think the Fanboys would have been a more enjoyable experience if this detail was omitted.

Fanboys is a fun and wild look into Star Wars fandom. It has some great cameos and funny references to future Star Wars and pop culture events. The cancer subplot was unnecessary and could have been ignored since every time it was brought up the film immediately kept moving on and ignored the fact Linus’ cancer was just mentioned. Fanboys was generic at times but that doesn’t mean you won’t have some fun along the way.