Well my friends, we are just a few weeks into the summer (at least if you are in the northern hemisphere that is) which often means popsicles, swimming pools, and vacations. What better way to travel to your destination than by a road trip! Road trips can be eventful to say the least. Several people crammed into a small space for hours on end? Talk about chaotic, particularly if it’s with your family, or at least with mine it is.  Anyway, in that spirit of vacation and travel, I invited Allie from Often Off Topic to look at our favorite films based around road trips. Allie offers reviews of movies, television series, and books. She also gives regular updates on what’s happening in her life in her Going Off Topic segment. If you don’t already follow her, I highly recommend you go check her site out.

This isn’t the first time Allie has been a guest here on DMR, either. Last year, when she was still one half of the duo Flick Chicks, she, her blogging partner Jenna, and I ranked the movies from the Disney Renaissance. Now she is back to join me as a special guest to list her five favorite road trip films. Take it away, Allie!
—
I so wish road trips were more of a thing in the UK. I guess the main problem is that we’re just a tiny little island, and our roads kind of suck. Nevermind though, because I get to live the dream through movies! These are my top 5 road trip movies.

Speaking of British folk who dream of an American road trip, that’s what Paul is all about! Simon Pegg and Nick Frost play 2 comic book geeks travelling across the US, ticking landmarks off their bucket list. Everything kind of goes haywire when they encounter an actual alien outside of Area 51. It’s not up there with Shaun of the Dead, but you can always count on this duo to make a comedy worth watching!

How is this movie 11 years old now? Sacha Baron Cohen plays Borat, sent on a trip to the US to report on what Kazakhstan TV says is the greatest country in the world. It preys on people who have no idea it’s a fictional movie, it’s inappropriate, but it’s funny as hell and stole the hearts of many of us Brits, including me. It spawned a lot of copycat movies which were terrible, but this one stands strong.

It’s impossible to explain Little Miss Sunshine to anyone without making it sound like the most depressing movie ever. A family take a road trip to take their chubby, uncoordinated daughter to a beauty pageant. Along for the ride is their Uncle who recently tried to commit suicide and well, I’ll let the rest be a surprise if you haven’t seen it before. It’s one of those rare movies that absolutely nails the blend of drama and comedy. 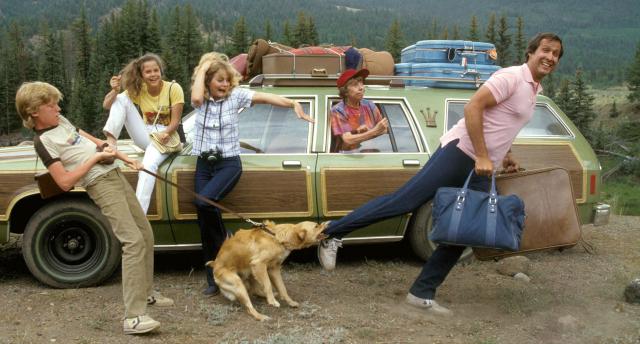 National Lampoon’s Vacation isn’t just the greatest family road trip movie ever. It might just be my #1 movie of all time. I can’t tell you how many times I watched this as a child. You don’t need to have had a road trip to identify with this one, just any holiday will do, or even any car journey spent with family. Everything that can go wrong does go wrong, and it holds up surprisingly well after all these years.

In fact, I love this movie so much that part of our Californian Honeymoon last year involved a trip to Six Flags Magic Mountain, which you may not know is where the fictional theme park Walley World in National Lampoon’s Vacation was set. Whilst there we managed to recreate this famous scene!
—
I think you should share your recreation of that scene, Allie! And not to be outdone on my own blog, here are my five favorite road trip films.

Dumb and Dumber is the kind of film that, on paper, seems like it should fail.  Two dimwits travel across the country to deliver a briefcase that one of them thought was left behind by mistake.  However, it is one of the funniest films from the 90s and one of Jim Carrey’s best films. And that is why it works, because of Carrey and Jeff Daniels. They have a chemistry that feels genuine.  It gives the film a lot of heart that it might not have otherwise.  As Harry (Daniels) and Lloyd (Carrey) travel to Aspen, Colorado, they cause all kinds of mayhem that garner some great laughs.

I feel like The Cannonball Run is a forgotten 1980s gem.  Released in the early 80s, it stars some of the biggest stars of the time, including Burt Reynolds, Dom DeLuise, Farrah Fawcett, Roger Moore, and many others.  I feel that of all the movie genres, comedies differ the most between eras and act as a timecapsule of their era. Every decade seems to have their own flavor or sense of humor. I mention that because it is very different from a comedy you would find these days, but I love it. It is much more subtle, think along the lines of The Naked Gun.  I can honestly say they don’t make them like this anymore.

You might not think of Finding Nemo as a road trip film but it has all the classic staples of a traditional road trip film.  A group of people traveling to a destination together? Check. Film has many side characters who only show up for a scene or two? Check.  Group feels closer at end of film? Check.  What makes this Pixar classic a classic are the characters and their story.  Merlin just wants to find his missing son, Nemo. Along the way, he runs into the forgetful Dory, who joins him on his search.  The story is so simple but it works. By following the road trip formula, Pixar was able to really explore the characters that would not have worked as well in another way.

A John Hughes classic. Planes, Trains and Automobiles is the movie on this list I saw for the first time most recently. I don’t know how it took me so long to watch this movie. Both Steve Martin and John Candy have been favorite comedic actors of mine and the two of them are absolutely fantastic together.  Their chemistry is some of the best in any comedy film.  Even after seeing it several times now, I still can’t help but laugh at Neal Page’s (Martin) misfortune and Del Griffith’s (Candy) good-natured clumsiness.  This was very close to being my number one spot but it was barely inched out by another John Hughes film.

Ah, the OG road trip movie (probably not, don’t quote me on that). I think I was drawn to National Lampoon’s Vacation based on the movie poster / cover art, honestly.  How can that be called anything less than epic?  This is one of those films that anyone can relate to.  Clark just wants to give his family the perfect vacation, his wife Ellen wants to get to Walley World in one piece, while their children, Rusty and Audrey, would rather be anywhere else. The Griswolds are constantly finding themselves in precarious situations that you can’t help but laugh it.  If you ever think your family has problems, watch this film and you’ll instantly feel better.

Honorary mentions include Seeking a Friend for the End of the World, Tommy Boy, Fanboys, and Zombieland.

But wait, there’s more! Here’s Allie again to tell you about it:

Now, it was my suggestion to Drew that we throw in a little something extra into this post for a bit of fun. My question was, if you could go on holiday or vacation anywhere from a movie, either fictional or real, where would you go? I probably should have thought about my answer before suggesting that because that’s why my part of this post has taken so long to write! Thinking of things I’ve watched recently though, I would absolutely love to explore the island of Themyscira, from Wonder Woman (2017). I haven’t had a true beach holiday in years, and that island looked stunning. Plus, I’m not exactly going to complain if Chris Pine just happened to wash up on the shore whilst I was sipping a cocktail!

A place I would really like to go would be the Republic capital planet of Coruscant. However, that might be a little bit further of a trip than Allie had in mind. So instead, I would travel to Hogwarts.  It would be fun to see the best school of witchcraft and wizardry the UK has to offer. Not to mention driving through that picturesque country side.

Big thank you to Allie for joining me. You can see all her antics on her site at Often Off Topic.

What are some of your favorite road trip films? 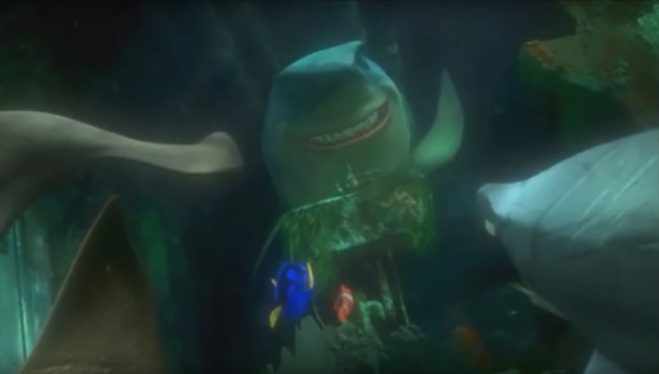 Bruce: [Rings bell] Alright then, the meeting has officially come to order. Let us all say the pledge.
Bruce, Chum, and Anchor: I am a nice shark, not a mindless eating machine. If I am to change this image, I must first change myself. Fish are friends, not food.

Thanks for everyone’s submission and one trip to P. Sherman 42 Wallaby Way, Sidney to the following people for answering correctly:

Thanks for everyone’s submissions and congratulations to the following people for answering correctly:

Jackie
Marta (Ramblings of a Cinefile)