This review was originally posted for the Ultimate Decades Blogathon 2022, hosted by Tranquil Dreams and me. 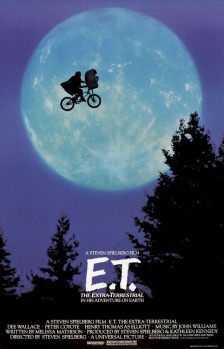 Synopsis
When E.T., an alien visiting Earth, gets left behind when his ship quickly leaves, Elliott (Henry Thomas) helps him contact his home world.

Review
When E.T. the Extra-Terrestrial released 40 years ago in 1982, no one, not even Steven Spielberg, predicted that it would be the phenomenon that it has become. After finally viewing it myself, I can see why this film has become a beloved classic. The movie tells a story about a boy befriending an alien while also examining the affect of divorce on children. It’s a very unique story combination that few filmmakers without Spielberg’s expertise could pull off. All of the relationships, Elliot’s relationship with E.T., Elliott’s relationship with his siblings, and Elliott’s and his siblings’ relationship with their mother, are all thoroughly developed and fleshed out. The score, created by Spielberg’s regular composer John Williams, excels at elevating the emotional undertones of every scene. One particular moment that stands out is the iconic moment when Elliott, with assistance from E.T., flies his bike in the air with the moon behind them. It’s already a fantastic scene but Williams’ score makes it even better. Even without the score, the script does a wonderful job of building emotion. By the end, you’ll no doubt have become attached to the characters, particularly the lovable E.T. himself, culminating in an emotional ending.

I thought E.T. the Extra-Terrestrial was GOOD 🙂 Filled with heart and relatable characters, Steven Spielberg crafts an epic tale that everyone can enjoy and hold dear.

Trivia
E.T. the Extra-Terrestrial holds the record for the longest ever theatrical run, staying in theaters for over one year after it’s release on June 11, 1982. (via IMDb)