So I have been trying to create posts for trailers over the last week or so, but so many good trailers have come out in that time that I’m just going to do another Trailer round-up.  I forgot to include the second full trailer for Interstellar in my last TRU, so that’s first on the list.  Also, the world Jupiter Ascending gets explored, the old chaps of Kingsman: The Secret Service prove you don’t have to be young to kick ass, Reese Witherspoon gets a double dose of trailers with The Good Lie and Inherent Vice, and Neeson’s Brian Mills is out for revenge in Tak3n.  To jump to a specific trailer, click on it’s link below.

Synopsis: Interstellar chronicles the adventures of a group of explorers who make use of a newly discovered wormhole to surpass the limitations on human space travel and conquer the vast distances involved in an interstellar voyage.

The more I see of Interstellar, the more I can’t wait.  I like how the first trailer and most of this trailer have focused on Matthew McConaughey and his family before his launch into space.  Then what is shown in their space adventures doesn’t look to give too much away.  Nolan has proven himself a more than capable story teller. Interstellar has everything going for it, so I hope it can pull it all together to create something great. 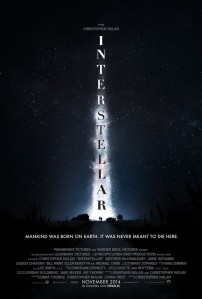 Official Synopsis: Kingsman: The Secret Service tells the story of a super-secret spy organization that recruits an unrefined but promising street kid into the agency’s ultra-competitive training program just as a global threat emerges from a twisted tech genius.

The biggest surprise for me from this trailer was learning that Samuel L. Jackson was the villain of this movie.  The previous trailer didn’t give that impression.  In other news, the action and special effects look pretty good. With actors like Colin Firth, Michael Caine, and Samuel L. Jackson, I’m hoping this is one of the better films this fall.

Official Synopsis: Jupiter Jones (Kunis) was born under a night sky, with signs predicting that she was destined for great things. Now grown, Jupiter dreams of the stars but wakes up to the cold reality of a job cleaning other people’s houses and an endless run of bad breaks. Only when Caine (Tatum), a genetically engineered ex-military hunter, arrives on Earth to track her down does Jupiter begin to glimpse the fate that has been waiting for her all along—her genetic signature marks her as next in line for an extraordinary inheritance that could alter the balance of the cosmos.

I have one thing to say about this movie: it looks gorgeous!  The Wachowskis have proven they know how to make a movie look pretty and Jupiter Ascending looks to be no different.  I can understand why the film has been delayed for so long if the time was spent on the visuals (it was originally supposed to come out this past July).

Official Synopsis: They were known simply as “The Lost Boys.” Orphaned by the brutal Civil war in Sudan that began in 1983, these young victims traveled as many as a thousand miles on foot in search of safety.  Fifteen years later, a humanitarian effort would bring 3600 lost boys and girls to America.

It has been a long time since I have seen a Reese Witherspoon film.  I missed the trailer for this movie that was released during the summer, but I’m glad I caught this one before it’s release.  I am a fan of The Blindside, so having one of its executive producers be a part of this film is great.  I probably won’t see it in the theaters, but I will definitely check out The Good Lie when it gets released on home video.

Official Synopsis: When private eye Doc Sportello’s ex-old lady suddenly out of nowhere shows up with a story about her current billionaire land developer boyfriend whom she just happens to be in love with, and a plot by his wife and her boyfriend to kidnap that billionaire and throw him in a loony bin…well, easy for her to say. It’s the tail end of the psychedelic `60s and paranoia is running the day and Doc knows that “love” is another of those words going around at the moment, like “trip” or “groovy,” that’s being way too overused—except this one usually leads to trouble.

This movie just looks like a ton of fun.  I’m not quite sure what to make of it yet, but it just screams “insanity.” And I like it.

Official Synopsis: Liam Neeson returns as ex-covert operative Bryan Mills, whose reconciliation with his ex-wife is tragically cut short when she is brutally murdered. Consumed with rage, and framed for the crime, he goes on the run to evade the relentless pursuit of the CIA, FBI and the police. For one last time, Mills must use his “particular set of skills,” to track down the real killers, exact his unique brand of justice, and protect the only thing that matters to him now – his daughter.

I like how Tak3n isn’t following the same formula as the two previous movies.  Taken was great, Taken 2 was good, but it was the same basic premise as the first.  However, this is something different (kind of).  We will also get more of Bryan Mills’ background and how he acquired his “set of skills.” As a fan of Liam Neeson and the Taken movies, I can’t wait for this one.

“Good Luck.”  That sent chills down my spine.

Tak3n shoots into US theaters January 9, 2015.  It is directed by Oliver Megaton and stars Liam Neeson, Forest Whitaker, Famke Janssen, and Maggie Grace. 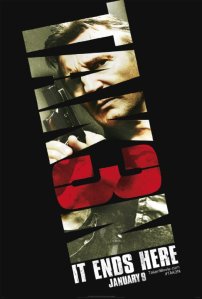 Stop by tomorrow and take a guess at this week’s Movie Whose Line. Which of these movies are you most looking forward to?