Synopsis
When Harry (Jeff Daniels) learns that he has a long lost daughter, he and Lloyd (Jim Carrey) head go on a road trip to Oxford, Maryland in search of her.

Review
Dumb and Dumber is one of my favorite road trip movies and normally I would be eager for a (actual) sequel to a film that I consider to be one of my “favorites.” However, going into Dumb and Dumber To, I can’t say that I was exactly excited to see it. As a result, my expectations weren’t very high, which I supposed helped since while it didn’t reach the low of Dumb and Dumberer, it was nowhere near as enjoyable as the first film. Thankfully, this film completely ignores Dumb and Dumberer, actually completely contradicting it at times. But that’s really the most positive thing I can say about this film. Its main problem is that lacks the heart that made the first film so entertaining despite its absurd premise. Dumb and Dumber To just feels absurd for absurdity’s sake. Since it is a sequel, especially a comedy sequel, there are plenty of call backs to the original that fans will recognize. The film wasn’t entire devoid of a few good jokes and I did chuckle several times but I couldn’t tell you any of them since they weren’t that memorable.

I thought Dumb and Dumber To was OK 😐 An improvement over Dumb and Dumberer but not by much. While it has its moments and I did laugh a few times, it doesn’t have the charm or endearing qualities of the first Dumb and Dumber. What we have here is just another case of a studio trying to make a sequel to a beloved film and falling short.

Favorite Quote
Harry: Wow. That is the single most boring sentence I ever heard.

If I’m not back in five minutes, just wait longer. -Ace Ventura

Thanks for everyone’s submissions and 500 points to Tom (Plain, Simple Tom Reviews) for answering correctly.

Thanks for everyone’s submission and one light that fell from the sky to the following people for answering correctly: 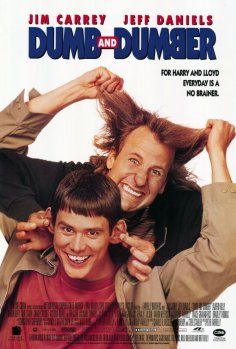 Synopsis
Lloyd (Jim Carrey) and Harry (Jeff Daniels) go on a road trip to Aspen, Colorado to return Mary Swanson (Lauren Holly) her briefcase after they mistakenly believe she forgot it at the Providence, Rhode Island airport. Meanwhile, Harry and Lloyd are pursued by two kidnappers (Joe Starr and Karen Duffy) who are also looking for the briefcase.

Review
Just by the name, Dumb and Dumber sounds like it is going to be a very outlandish film, with two bumbling idiots doing stupid and absurd stuff to create laughs that lack any actual comedy. That is partially correct. Yes, Dumb and Dumber follows two bumbling idiots who do stupid and absurd stuff to create laughs. However, what sets this film up for success is it is able to create characters that you can care about, root for and get behind, creating a film that is genuinely funny.

From the first introductions of Lloyd (Jim Carrey) and Harry (Jeff Daniels), the movie sets up exactly what you should be expecting from these characters, as well as the movie itself. When Lloyd asks a woman where she is from, and she tells him she is from Austria, he does an Australian accent and says some stereotypical Australian phrases. Harry is a dog groomer and decides the dogs should eat before going to their pageant, not realizing the drive would upset their stomachs. They are set up as dim-witted but good-natured characters. This is perfect for the movie because if they were simply dim-witted, there wouldn’t be any way or reason to really connect with the them.

Since this is a buddy movie, how well the film works rests solely on the shoulders of Carrey and Daniels. If there is any kind of kink in their chemistry, the film would fail. Thankfully, Carrey and Daniels are an absolute blast together. They play very well off each other. Carrey is exactly what you would expect out from him, especially from one of his earlier films. Daniels isn’t as much of a comedy actor as Carrey, especially around the time of Dumb and Dumber‘s release, but he manages to go comedy toe-to-toe with Carrey and they are both the better for it.

What I like most about Harry and Lloyd is their stupidity seems so nonchalant. Like I said before, they are set up as dim-witted, but they don’t realize they are that way. From the small things like misunderstanding what words mean, like Austrian versus Australian, to having the opportunity to be oil boys on a bikini bus tour but instead they direct them to somebody else. The script has all sorts of gags like that and there are many of them. It reminds me of films like Airplane! where the movie throws as many jokes out as possible with the expectation that the ones that miss their mark are forgotten quickly because the next one is already there.

I thought Dumb and Dumber was GREAT 😀 Despite being dumb, for lack of a better term, the two main characters are extremely likable. Jim Carrey and Jeff Daniels play extremely well off each other, leading to some very quotable lines and memorable moments. If you like any of Carrey’s other films, especially his earlier ones like The Mask or Ace Ventura: Pet Detective, then you find a lot to love here.

Favorite Quote
Harry: Nice set of hooters you got there.
Mary: I beg your pardon.
Harry: The owls. They’re beautiful.
Mary: Oh, yeah. Are you a bird lover?
Harry: Me? Oh, no. Well I used to have a parakeet but now my main area of expertise is canines. Dogs to the layperson.
Mary: Thanks. I love dogs, too. So how are you involved with them?
Harry: Oh, you know, I’ve trained them, bathed them, clipped them. I’ve even bred them.
Mary: Oh, really? Any unusual breeding?
Harry: No, mostly just doggy style. One time, we successfully mated a bulldog with a shih tzu.
Mary: Really? That’s weird.
Harry: Yeah. We called it a bullshit.

The nerve of those Whos. Inviting me down there, on such short notice! Even if I wanted to go, my schedule wouldn’t allow it. 1:00, wallow in self pity. 4:30, stare into the abyss. 5:00, solve world hunger, tell no one. 5:30, jazzercise. 6:30, dinner with me. I can’t cancel that again. 7:00, wrestle with myself-loathing. I’m booked! Of course if I bumped the loathing to 9, I can still be done in time to lay in bed, stare at the ceiling and slip slowly into madness. -The Grinch

Synopsis
Kick-Ass’ (Aaron Taylor-Johnson) bravery and actions inspire a new wave of masked crusaders, led by the born-again ex-mob enforcer Colonel Stars and Stripes (Jim Carrey). When Hit-Girl (Chloe Grace Moretz) is forced to retire from crime fighting, Kick-Ass joins with the new group of heroes, named Justice Forever. Seeking revenge for the death of his father, Red Mist (Christopher Mintz-Plasse), renamed The Mother F**ker, forms his own group of evil. With his new evil league behind him, The Mother F**ker enacts a plan to make Kick-Ass pay for killing his dad.

Review
Kick-Ass 2 does what good every action sequel should and ups the stakes and danger from its predecessor. This time, the villain, The Mother F**ker, is gunning directly for Kick-Ass and everyone around him. Needless to say, this causes complications in Kick-Ass’ personal life, adding to the strain of balancing high school and crime fighting. The results were pretty intriguing and gruesome.

This is not a movie for the faint of heart. I think the kill count was higher in the previous movie, but the kills were much more… um… stylized this time around. There were some interesting ways the characters found to kill, particularly the villain Mother Russia (Olga Kurkulina). My favorite kill of hers was placing a running lawnmower onto the back of a car and reversing into an oncoming car, sending the mower through the windshield. And that was probably one of the milder kills in the movie.

Much like the previous film, Kick-Ass 2 is genuinely funny. The humor does a good job of keeping the movie from becoming too dark. Moretz had some moments as a stereotypical hormone-filled teenager that came off a somewhat cheesy, but they were still funny. I expected a few more jokes out of Carrey, but unfortunately he didn’t have much screen time.

Moretz is an actress to keep an eye on in the near future. She was phenomenal. She did a great job of playing the hard-ass ass-kicker, but at the same time the sweet little high schooler trying to fit in. Few young actresses can command the screen the way she does. It’s too bad Jim Carrey renounced Kick-Ass 2, because Colonel Stars and Stripes was bad ass. Though he had a limited role, it would have been cool to see more of him.

On the other side of the law, I don’t think Mintz-Plasse was the best actor to play the central villain. The Mother F**ker is supposed to be menacing, but he doesn’t come off that way and it is hard to take him seriously. He does well in the first Kick-Ass as the kid vying for his father’s approval, but not so well as the maniacal villain. Mintz-Plasse is more suited for lighter comedic roles. It’s nice to see actors take roles outside their norm, but sometimes it doesn’t work, and this was one of those times.

Kick-Ass 2 is a good action sequel that ups the danger from the first Kick-Ass, but at the same time diving deeper into who the characters are. Over-the-top action, gruesome deaths, and non-stop laughs make for a humorously visceral experience.