Review
I consider myself a pretty hardcore gamer and when Wreck-It Ralph hit theaters in 2012, that was my Roger Rabbit. Seeing all of my favorite video game characters pop up was a blast. Throw in a good story and interesting characters and you’ve got something great. While the story of Wreck-It Ralph felt complete, the world was ripe for storytelling possibilities. With the inside-a-video-game box ticked, Ralph Breaks the Internet jumps head first into the next pop culture riddled environment: the internet (duh).

Jumping six years after the previous film, we see that Ralph (John C. Reilly) and Vanellope (Sarah Silverman) have become the best of friends. However, what they consider to be the perfect life varies greatly, creating some friction in their relationship and the crux of the story. This feels like a natural evolution of these characters. First, we get to see their rocky start in the previous film. Then in the beginning of this movie, we see how close they have become since we last saw them. Naturally, their bond can be strengthened further. But to do so, they have to overcome a conflict and grow together. Disagreements between friends, overcoming them, and becoming closer friends in the end is something almost everyone can relate to.

While Wreck-It Ralph had some pretty great voice casting, particularly in John C. Reilly, Sarah Silverman, Jack McBrayer, and Jane Lynch, Ralph Breaks the Internet adds more greatness to that stellar cast. Between her short appearance in the Fast & Furious franchise and the amazing Wonder Woman, Gal Gadot has become one of my favorite actresses to see on a film’s cast list. Her character Shank oozes coolness and a big part of that is how Gadot portrays her. Bill Hader as the pop up JP Spamley was a pleasant surprise. After watching Spider-Man 2 recently, seeing a cameo from Alfred Molina was exciting. Taraji P. Henson as the algorithm Yesss (yes, with three s’s) was a perfect fit. While I might not have know her name, I definitely recognized her voice and personality. However, my greatest satisfaction was seeing most of the voice actresses from the Disney princesses reprise their roles. Nothing beats an original.

This movie reminds me a lot of Tron where the writers and directors envisioned what it would be like to go inside of a computer, or in this case, the internet. As someone who works with computers daily and as the family IT department, it’s fascinating to see what these creators cook up inside their heads for what websites and online interactions we deal with on a regular basis would look like as a living world. All of the easter eggs thrown in for the internet savvy is fantastic, especially those from the good old days of dial-up and chat rooms. Some of the younger audience members might not get a lot of the jokes (particularly the more visual nods) and I wonder how well these references will stand up as the movie ages, but at the here and now, they’re great.

I thought Ralph Breaks the Internet was GOOD 🙂 Following a natural story and character progression, there is a lot here that audiences of all ages can relate to. Great voice casting and an imaginative world is the icing on the cake. While Disney has never had an animated theatrical threequel, I would love the chance to return to the world of Ralph, Vanellope, and all their video game friends once more.

PS, I love that Alan Tudyk is becoming Disney Animation’s John Ratzenberger. What a talented actor! 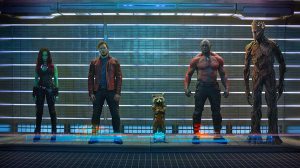 Synopsis
Wreck-It Ralph (John C. Reilly) is a bad guy, and he’s tired of it. After constantly being overshadowed by his games titular hero, Fix-It Felix, Jr. (Jack McBrayer), Ralph sets out to claim a medal of his own and prove that he can be a good guy, too. However, after game jumping, he ends up in Sugar Rush, where he loses the medal after he meets the misfit Vanellope Von Schweetz (Sarah Silverman). She agrees to help him get his prized medal back if he helps her win a race to get a spot on Sugar Rush’s character selection screen.

Review
I love to play video games and grew up on the likes Mario, Sonic, Pac-Man, and many others. So when I first heard that Disney was creating a movie in the world of video games, as you can imagine, I was pretty excited. Finally I would get to see my favorite game characters together on screen. Wreck-It Ralph, the resulting mash up, was greater than anything I could have imagined.

Wreck-It Ralph is the Who Framed Roger Rabbit of video games. There are characters from Nintendo, SEGA, Konami, Capcom, and many more that I can’t even remember right now, all interacting together. When the characters are walking through Game Central Station, a parody of New York City’s Grand Central Stations located in the power strip, there are many, many cameos. You really have to look close to catch them all, and even after a few viewings I am still finding nods and references I haven’t caught before. It’s a real nostalgia trip.

There are four distinct worlds in Wreck-It Ralph: The “real world”, Fix-It Felix, Jr., Hero’s Duty and Sugar Rush. The animators did a great job of making each world feel unique. The world of Fix-It Felix, Jr. has a flat color palate reminiscent of the 8-bit era. Everything is based around squares; The dust is square, cake splatter is square, even the characters only move at right angles. Hero’s Duty is much darker and has greater contrasts and sharper edges than the other worlds. On the other hand, Sugar Rush is much more colorful than the others and everything is rounder and softer. These little nuances between each world makes each one a unique experience.

Reilly wouldn’t have been my first choice to voice Ralph, but he did phenomenal in the role. His humor carried over well from his movies like Step Brothers and Cedar Rapids and made the part energetic, while at the same time not becoming overbearing. McBrayer and Silverman fit their roles appropriately and Jane Lynch filled the role of the no-nonsense Sergeant Calhoun surprisingly well. But the biggest surprise was Alan Tudyk as King Candy, the ruler of Sugar Rush. I didn’t even realize it was him until the credits rolled! He did an amazing job and I hope he does more voice acting (He voiced the Duke of Weselton in the more recent Frozen, but that was only a minor role). Disney did great casting the right people for this film.

Like most Disney movies, Wreck-It Ralph has a lot of heart. I’m sure almost anyone can relate to Ralph’s struggle to be accepted by those around him or Vanellope’s desire to fit in. The oddball relationship Ralph and Vanellope formed together can be seen in many of our own friendships. Whether you are an adult or kid, you can find some part of yourself in this movie.

Wreck-It Ralph pays homage to many of the great video game characters and successfully brings them all together, very similar to the cartoon characters in Who Framed Roger Rabbit. The animation is superb and each video game world feels distinct. Every voice actor was perfectly cast, but Tudyk stole the scene as King Candy. There is a lot of heart to the story and something for everyone to relate to, either in the story or characters. Disney has once again created an animated masterpiece that everyone, young and old, can enjoy.