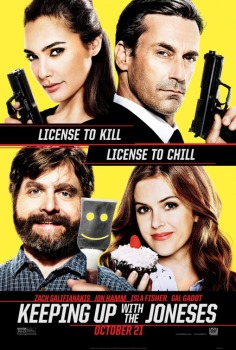 Synopsis
Jeff Gaffney (Zach Galifianakis) and his wife Karen (Isla Fisher) are an average suburban couple but when Tim (Jon Hamm) and Natalie (Gal Gadot) Jones move in across the street they get mixed into the crazy world of espionage.

Review
I was immediately drawn to Keeping Up with the Joneses once I saw who it starred. With names like Zach Galifianakis, Isla Fisher, Gal Gadot, and John Hamm, this film boasts a talented cast list. With the exception of Hamm, all of the above actors have been some of my favorite films. Keeping Up with the Joneses offers some pretty good laughs but doesn’t seem to fully utilize the talent its cast possesses. However, that’s not to say they don’t do well. All four of them have great chemistry with each other. Either in pairs or all of them together, each scene made me at least smile with enjoyment, if not laugh a little. But that is all the reaction they earned. I think that was my biggest disappointment in this movie is there aren’t many stand-out or laugh-out-loud moments. It was enjoyable but mostly forgettable. Despite being veterans of comedies, both Galifianakis and Fisher are fairly forgettable when compared to their roles in other films, such as The Hangover or Wedding Crashers respectively. Hamm and Gadot seem to have fun as the more serious counterparts to Galifianakis and Fisher. They played to their strengths better than the other members of the cast, turning out more of the memorable moments than the others.

I thought Keeping Up with the Joneses was OK 😐 I know I might have painted the picture that I didn’t enjoy the film a whole lot but I did. It just left me underwhelmed where I was expecting more from such a talented cast. Keeping Up with the Joneses plays it safe. It was a good comedy that walks this weird middle ground where it is not too exciting while never becoming drab either. It’s actually pretty impressive how ordinary it is.