Before I get to the review, I just want to remind you that there is still a little bit of time left in the submission period for the Ultimate 2010s Blogathon, which is open until February 9th, 2020. If you would like to participate in the blogathon, all the details can be found in this announcement post.

Okay, now on to the review! 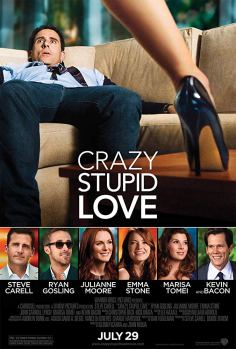 Synopsis
After Cal’s (Steve Carell) wife Emily (Julianne Moore) tells him she wants a divorce, he begins hanging out at bars, where he meets Jacob (Ryan Gosling). With Jacob’s help, Cal reinvents himself and learns Jacob’s tricks to picking up women.

Review
Many romantic comedies follow a similar and predicable story. Crazy, Stupid, Love, even with everything it does well, does not escape from this trapping. However, it is able brings a genuineness not often found in similar movies. The first reason for this is the star-studded cast, which consists of Steve Carell, Ryan Gosling, Julianne Moore, Emma Stone, Marissa Tomei, and Kevin Bacon. What makes this film work so well is the chemistry between all the cast members. With pairings like Carell and Gosling, Gosling and Stone, and Carell and Moore, and even Carell and Jonah Bobo, who plays Carell’s son, every scene is funny, sweet, and filled with so much heart that it’s not hard to enjoy it. Marisa Tomei is only in a handful of scenes but she steals every one. With a cast like this, there is no one stand-out performance; they are all wonderful.

With so many characters, there are several story lines happening at once. When they all come together about two-thirds through the movie, hilarity ensues, resulting in one of the best scenes of the film. The script, written by Dan Fogelman, is the second reason this movie shines. It manages to balance every character and memorable moment well. Even though the cast of characters is fairly large, especially for a movie like this, no one ever feels like they are overpowering the others. There is a clear focus on Cal, Jacob, and Emily, but the supporting cast get plenty of their own stand-out moments as well. Also, the script doesn’t sacrificing character development for one-liners. a pitfall common in comedies. Instead, the script accentuates the talents of the cast, letting comedic moments flow naturally, allowing character moments and humorous moments stand side-by-side without feeling jarring or unnatural.

I thought Crazy, Stupid, Love was GOOD 🙂 Like many romantic comedies, it is predicable. But what it lacks in individualism, it makes up for with heart, an enduring cast, and a well-balanced script that expertly manages the film’s many relatable characters and great moments. This film is an example of when all the right pieces come together just right and at the right time, creating something worthwhile in the process.

Favorite Quote
Jacob: Are you Steve Jobs?
Cal: What?
Jacob: Hold on a second. Are you the billionaire owner of Apple Computers?
Cal: No.
Jacob: Oh, okay. Well in that case you got no right to wear New Balance sneakers ever. 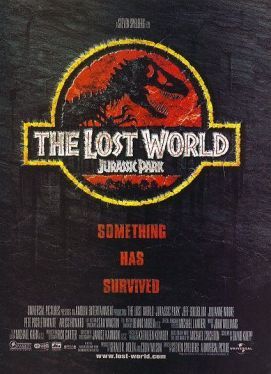 Synopsis
When a British couple stumble upon Isla Sorna, another island filled with dinosaurs, John Hammond (Richard Attenborough) sends Ian Malcolm (Jeff Goldblum), survivor of the incident at Jurassic Park four years prior, and a small team to photograph the dinosaurs in the natural habitat to rally support for the island’s isolation before Hammond’s nephew, Peter Ludlow (Arliss Howard), can remove the dinosaurs from the island.

Review
It can be difficult to create a sequel to a movie that perfectly balances action, characterization and humor the way Jurassic Park does. It is even more unlikely to do so successfully with the most obnoxious character as the sequel’s main character. However, The Lost World: Jurassic Park somehow manages to be a decent follow-up by doing just that.

Ian Malcolm (Jeff Goldblum) was the character in Jurassic Park that you loved to hate. He is obnoxious but charismatic at the same time. I thought it was interesting that he was the main character in The Lost World. I almost would have expected Alan Grant, played by Sam Neill, to take the spotlight again. There was a sense of humor Goldblum brought to the character, but it is not as prevalent this time around. He still has his funny moments, with Goldblum’s signature humor, but not as much as before. It is clear the character has matured since the last movie.

In Jurassic Park, there was a moral to the story. However, this film tries too much to imitate that message but is unable to do so as strongly. Survival becomes a big part of the story and the movie begins to slip into B-level monster movie territory. It doesn’t make it quite that far, but it comes awfully close.

Every time I watch The Lost World, I forget that Vince Vaughn and Julianne Moore are in it. This movie doesn’t seem like their usual type of film but both do well in their parts. Goldblum was the comic relief in Jurassic Park, this time Richard Schiff has that responsibility. Too bad he didn’t stick around longer because some of his scenes were the most humorous of the film.

The Tyrannosaurus Rex didn’t get as much screen time as I would have expected in Jurassic Park after watching the trailer. Instead, the velocirapotors were the main dinosaurs. In The Lost World that is reversed. Velociraptors have one or two scenes in the middle of the movie but that’s it. Otherwise, the T-Rex is the main dinosaur focused on most in this movie. I really liked that because, after all, the T-Rex is the king of the lizards.

The Lost World: Jurassic Park takes the Jeff Goldblum, the comic relief from Jurassic Park, removes some of his humor and makes him the central character. Somehow this manages to work, if not by himself then with the cast around him, particularly Richard Schiff. This movie tries to have the same moral as the previous film, but begins to degrade into monster movie status when the story becomes about survival. The Tyrannosaurus Rex finally gets the spotlight and velociraptors, the main dinosaur in Jurassic Park, were relegated to only a few scenes. It may not be the perfect sequel, but The Lost World brought dinosaurs back on screen, so that’s something, right?