Synopsis
Alice (Reese Witherpoon), a recently divorced, single mother, moves into her childhood home in Los Angeles. After meeting Harry (Pico Alexander), Teddy (Nat Wolff) and George (Jon Rudnitsky), she lets the three filmmakers live in her home while they try to get their big break, causing her life to take an unexpected turn.

Review
I don’t normally see films like Home Again in the theaters but I found myself in a theater-going dry spell of sorts and my mom was visiting and we hadn’t seen a movie together in a while so I figured why not. For a romantic comedy, this movie didn’t lean too heavily on either. There are the romance parts and there are comedy parts but neither completely overtake the film. First-time writer/director Hallie Meyers-Shyer has a story about Alice she wants to tell and she uses the romance and the comedy to tell it, however, they never become the central focus. And it never becomes over-the-top or way out-there and never resorts to a cheap laugh. Every comedy moment feels natural and genuinely funny. You might need to suspend some disbelief but this is a movie we’re talking about here! That pretty much comes with the territory, regardless of genre.

I wouldn’t call Reese Witherspoon one of my favorite actresses but I do generally enjoy her movies that I’ve seen. This seems like a very typical fair for her but she is as charming as ever. As for the rest of the cast, I am mostly unfamiliar with them, so I can’t compare their performances to what they’ve done before. Although, I can say that in Home Again, I thought they all did very well. The three filmmakers who move in with Alice, Pico Alexander, Nat Wolff, and Jon Rudnitsky, were fun and believable together. They felt like actual friends and seemed like they were having a good time together. Some of my favorite scenes were the ones with Rudnitsky and Lola Flanery, playing Alice’s oldest daughter. Together, they had many playful and heartwarming scenes.

I thought Home Again was GOOD 🙂 Romantic comedies aren’t usually a type of movie I go out of my way to see so I don’t have a ton of experience with the genre. However, I did enjoy the story this film told. Reese Witherspoon and the rest of the cast gave enjoyable performances with some moving and heartfelt moments. I’m sure it’s far from the best rom-com out there but running at about one and a half hours, it never feels tedious and offers a feel-good story.

And we’ve reached the end of the line. This is the last stop of the blogathon.  I love to get recommendations, so I didn’t have to think hard when trying to figure out which movie to review for this year’s Christmas in July blogathon.  Now I’ll stop blabbering and get onto the review. 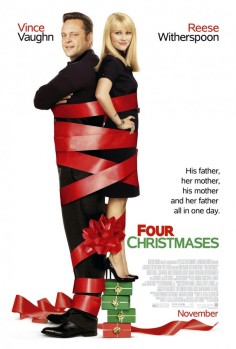 Synopsis
Brad (Vince Vaughn) and Kate (Reese Witherspoon) both come from divorced families. When their vacation to Fiji is canceled because of bad weather, they visit all four parents in one day, which puts their relationship to the test.

Review
Four Christmases starts off in an interesting place. Most Christmas movies are all about wanting to spend time with family. However, Brad and Kate are desperately trying to avoid theirs. Once they realize that they must spend the holiday with their parents, it creeps into the “survive my wacky family” film. It executes this premise fairly well but they go through each parent so quick, no one besides Brad and Kate are fleshed out much. We get to meet Brad’s UFC-fanatic brothers and best friend who is now his step dad, and Kate’s newly reborn mom and her dad, who seems to be the only normal one. Story wise, these characters exist solely to push Brad and Kate closer together. When based on that, then they fulfill their job but getting more time with them would have been good.

I’m a fan of Vince Vaughn, so the comedy worked well for me. There was one scene in particular, where Brad and Kate played Mary and Joseph in the church’s play and Brad went all “I gotta save the play” and started monologuing when Kate forgot her lines, that I really enjoyed. Since most of the time is spent with Brad and Kate, it falls to Vaughn and Witherspoon for the laughs. I like Witherspoon, but I didn’t find myself laughing at her jokes very much. So really, your enjoyment of this film comes down to how funny you find Vaughn. Four Christmases has its issues but overall, it has heart, a meaningful (even if not well executed) message, and offers some good laughs along the way.

This movie was recommended by Erin from Dynamite Review.

As for who I would like to meet under the mistletoe… Alex Morgan.

Cute and amazing at soccer? Yes, please!  I followed this year’s FIFA Women’s World Cup as much as I could.  Like many, many others, I was ecstatic to watch our ladies win the tournament this year. To make her even more awesome, she will be on the box art of FIFA 16, making her the first woman on the cover of a FIFA video game. Woot woot!

And with that, the Christmas in July 2015 Blogathon comes to a close! Thanks to everyone who joined in. Tomorrow I will post the answers to Tim’s Twelve Days of Blu-Rays riddle, so head over there to see how many you can guess, as well as make an announcement of something big that’s coming next week for Drew’s Reviews.