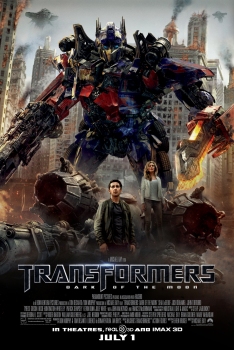 Synopsis
When the Transformers learn that an ancient Cybertonian ship is on the moon, the Autobots must race to discover its secrets before the Decepticons do.

Review
After the disappointment of Transformers: Revenge of the Fallen, I went into the third live-action Transformers film with caution. Thankfully, Transformers: Dark of the Moon seems to have learned after Revenge of the Fallen and treats the audience with more respect. The humor isn’t as immature as before. In fact, there is not as much humor as there was previous films in the franchise. Whereas the last two films had jokes coming from multiple sources, this movie primarily relies on Shia LeBeouf to carry that aspect of it. Instead, it takes itself much more seriously, which ends up helping overall because the story is much bigger and epic than before. Like Revenge of the Fallen, it goes bigger than the films before in a true sequel fashion. This focus on the story and characters rather than the childish humor creates a much more engaging and exciting experience.

Transformers: Dark of the Moon is the definition of a “blockbuster” movie. It’s big, it’s loud, and it takes you on an adventure. It isn’t as glob-spanning as Revenge of the Fallen but that’s okay. While the world trotting grandeur isn’t there, the action is much bigger, which is saying something considering the last film. The best part is that this movie does a much better job of framing the action scenes around the robots than the previous films. There are still multiple close-ups during the fights making it tricky to see everything but for the most part, the camera stays further back, giving a better view of the fight, especially against the backdrop of Chicago during the final act.

I thought Transformers: Dark of the Moon was GOOD 🙂 Just like Transformers: Revenge of the Fallen went bigger than Transformers, Dark of the Moon goes bigger than Revenge of the Fallen. Even though the film is longer, the story is much more focused and the humor is much better, being toned back severely and being more serious in general. Overall, it is a vast improvement on all counts than the let down of its immediate predecessor in the franchise.

Trivia
According to ILM, the company employed its entire rendering machinery to use on the film. This added up to using more than 200,000 rendering hours per day, the equivalent of 22.8 years of render time in 24 hours. (via IMDb)