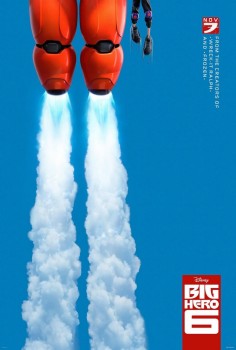 Synopsis
Hiro Hamada (Ryan Potter) is a boy genius who is convinced by his brother, Tadashi (Daniel Henney), to put his gift towards building something to help mankind. When his invention is stolen by a super villain, he uses his intellect to outfit his robot, Baymax (Scot Adsit), and his friends, Fred (TJ Miller), Go Go (Jamie Chung), Wasabi (Damon Wayans, Jr.), and Lemon Honey (Genesis Rodriguez), with high tech gear to stop the mysterious figure.

Review
I was so ecstatic when Disney announced Big Hero 6 because it meant they were beginning to take full advantage of their purchase of Marvel. Although I know a lot about the Marvel comic universe, I know very little about Big Hero 6, other than who they are. But that didn’t matter, I was still excited for the chance to see them on the big screen. On top of creating an animated superhero movie, it was created by the same team that made Wreck-It Ralph and Frozen. Only one thought came into my mind: Uh, yes please!

Both Wreck-It Ralph and Frozen had great looking animation, and Big Hero 6 is just as impressive, if not more. The fictional city of Sanfransokyo is a sprawling cityscape, that is a cool mix of Japanese and American architecture. It has vivid colors that rival that of Sugar Rush. The characters’ costumes were bright and contrasted with their more subdued city environments. The animation was most impressive when the camera followed Hiro and Baymax into the sky and it had a breathtaking bird’s-eye-view of the entire city.

Each of the characters have a fun and unique look. When the movie first ended, one of the notes I made was that the characters were less charactatured than Disney’s last several films. But the more I thought about it, the more I realized that wasn’t true. Regardless, it gave a one-of-a-kind feel to the film and to the characters. I like how varied and bright the heroes’ costumes are. They fit in perfectly with the environment of Sanfransokyo.

Baymax, the huggable robot friend of Hiro, easily stole the film. Scott Adsit brought the character to life wonderfully. Baymax was the emotional core of the film and was a big part of connecting Hiro to his older brother. Much of the film’s best moments involved Baymax in one way or another. Since the relationship between Baymax and Hiro was such a focus of Big Hero 6, their relationship is the only one that gets any real development as a result.

Disney has proven that they can write movies that appeal to several demographics at the same time, and Big Hero 6 is no exception. There were some jokes that appealed to either the adults or the children, but often I heard kids and grownups laughing together. TJ Miller is the same TJ Miller he is in his other movies, like How to Train Your Dragon, and gives many great one-liners. Damon Wayans, Jr.’s panicked Wasabi and Jamie Chung’s tough-exteriored Go-Go have their moments, too. However, they are nothing compared to Baymax. As mentioned before, most of the funniest lines come from him.

Big Hero 6 continues Disney’s strong animation resurgence. The animation is positively gorgeous and there is a little something for everyone of every age. I think it is safe to say that Disney has achieved a second renaissance and I could not be more excited.

Official Synopsis: With all the heart and humor audiences expect from Walt Disney Animation Studios, “Big Hero 6” is an action-packed comedy-adventure about robotics prodigy Hiro Hamada, who learns to harness his genius—thanks to his brilliant brother Tadashi and their like-minded friends: adrenaline junkie Go Go Tamago, neatnik Wasabi, chemistry whiz Honey Lemon and fanboy Fred. When a devastating turn of events catapults them into the midst of a dangerous plot unfolding in the streets of San Fransokyo, Hiro turns to his closest companion—a robot named Baymax—and transforms the group into a band of high-tech heroes determined to solve the mystery. Inspired by the Marvel comics of the same name, and featuring comic-book style action, “Big Hero 6” is directed by Don Hall (“Winnie the Pooh”) and Chris Williams (“Bolt”), and produced by Roy Conli (“Tangled”).

Big Hero 6 is a Japanese super hero team from the Marvel comics.  I’m not that familiar with the characters but from this trailer, I’m a fan of Big Hero 6.  The majority of this trailer focuses on Hiro (Ryan Potter) and his robot Baymax (Scot Adsit) with some of the other main characters seen towards the end.  Hopefully the next trailer will showcase the entire team.  The computer animation looks great, although it doesn’t seem to be much different from Disney’s last few films, Frozen and Wreck-It-Ralph.  I mentioned when the teaser was released that it would be cool to find some way to incorporate this movie into the larger Marvel Cinematic Universe (I don’t think it will happen but is cool to think about nonetheless).  If nothing else, it seems like it will be humorous.