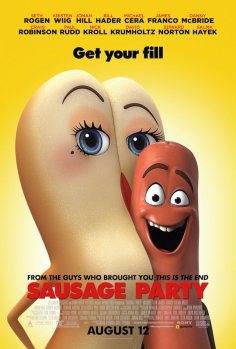 Synopsis
All food in the super market want to go to the Great Beyond, the perfect world outside of their store. For Frank the sausage (Seth Rogen (voice)), this means finally getting the chance to be with his girlfriend, Brenda the bun (Kristen Wiig (voice)). When a jar of honey mustard (Danny McBride (voice)) returns from the Great Beyond, shaken from the experience, Frank sets out on a journey to find out what really happens when food goes out the super market doors.

Review
That synopsis is a huge misrepresentation of the film. I cannot even begin to really describe Sausage Party. At first, it may seem like a food version of Toy Story but that could not be any more false. The similarities end after the anthropomorphism of the characters. This film is exactly what I expected after watching the previews: vulgar, juvenile, disgusting, and sexual innuendos everywhere, which is right up my alley as someone who has the mental maturity and sense of humor of a 15-year-old. However, Sausage Party ignores any sensible lines and instead flies miles past them. I can’t recall how many times I thought to myself, “did they just go there?” Then the next scene thought it again. I don’t think my jaw has dropped so many times while watching a movie before. It’s like every scene tried to out what-the-fuck-did-they-just-do the last. Then in the last five minutes, the director said “fuck it” and the movie devolved into pure, insane absurdity. I think it is safe to say that I have never seen a film like this before and I haven’t determined yet whether or not I mean that in a good way.

I thought Sausage Party was GOOD :-). I had a really hard time deciding on what to rate this. On the one hand, I laughed. A lot. But in the other, it is very obscene, pushing the boundaries even for me. In the end, I laughed and got enjoyment from it, which is what I want out of a movie. Although, I wouldn’t mind neuralyzing myself and forgetting I ever saw this film. If I ever see Sausage Party again, it will be too soon.

Teenage Mutant Ninja Turtles: out of the Shadows trailer #4

Which of these films are you most excited to see?