This review was originally posted for MovieRob‘s space-themed genre grandeur. 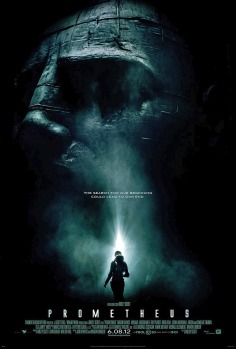 Synopsis
Archeologists Elizabeth Shaw (Noomi Rapace) and Charlie Holloway (Logan Marshall-Green) discover clues to mankind’s origin and takes a ship and crew to an alien planet, thanks to the Weyland Corporation. At their destination, they find more than they expected, and may end up causing the destruction of the Earth.

Review
Prometheus exists in the same universe as the Alien movies and acts as a pseudo-prequel, supposedly hoping to answer the questions about the origins of the xenomorphs. However, in the end, it creates more questions than it answers. It follows a very similar format and pacing as Alien (not surprising since they both come from the mind of Ridley Scott). We meet the crew of Prometheus as they come out of stasis. Then they go to the planet’s surface, where they enter an alien structure. All of a sudden, the crew must fight for their lives against an alien creature. It’s almost exactly the same as the aforementioned Alien, but it lacks the atmosphere that made the 1979 film a classic.

That’s not to say it isn’t entertaining, it just offers a slightly different experience given their similarities. Micheal Fassbender is the highlight of the film. He plays David, an android very similar to Ash in Alien. He is creepy but sophisticated at the same time. Noomi Rapace is the Sigourney Weaver of this film, proving that women can kick just as much alien ass as the men can. The first two acts are mostly set-up and exploring the environment and catacombs. It’s fairly slow until the last third, then it really picks up once the alien is revealed. At times it seems to attempt the horror aspect of Alien, but it feels out of place compared to the rest of the film. Prometheus is an enjoyable film, but if it’s goal was to clear things up about where the xenomorphs came from, it fails. But hey, at least it looks pretty, right?