Synopsis
Mitch Buchannon (Dwayne Johnson) and his team of lifeguards protect the beaches of Emerald Bay, Florida. When drugs start appearing on his beach, Buchannon and his team, including new recruit and former Olympic swimmer Matt Brody (Zac Efron), work to expose the criminal behind the drugs, Victoria Leeds (Priyanka Chopra).

Review
I don’t know much about the Baywatch television series, other than it starred Pamela Anderson and David Hasselhoff as lifeguards, as well as gratuitous amounts of slow-motion running. Based on the cast of Baywatch and the tone of the trailers, I figured this movie would have little to do with the show its characters come from. So while I can’t make any comparisons to the source material, I can tell you how it stacked up as a movie: it was hilarious. Both Dwayne Johnson and Zac Efron can be very comedic actors. Yet, if they don’t have a good person to bounce off of, their one-liners can only do so much. These two together have fantastic chemistry and are absolutely side-splitting. Every scene had jokes flying rapid fire and while not all of them stuck, they were onto the next one before you could really process it.

Most of the jokes between Johnson and Efron consist of crude and insulting jokes and one-liners. Like all humor, it is subjective, so it might not be your cup of tea but if you’ve read any of my other comedy reviews, you’ll know that this my kind of comedy. Of course, the rest of the cast was good as well, particularly Yahya Abdul-Mateen and Pryanka Chopra. Abdul-Mateen has some funny lines as a local police officer exhausted of the lifeguards trying to be investigators. Last summer I binged season one of the show Quantico, which stars Chopra as the protagonist. It was fun to see her on the other side as the antagonist. Since the setting for this movie is on a beach, there are a lot of shirtless men and bikini-clad women. No matter your preference, there is plenty of eye candy for everyone. 😉

I thought Baywatch was GREAT 😀 I’m sure that if compared to the original Baywatch television series, these two have nothing in common. However, as a film taken on its own merit, it is fun and humorous. In the next few years, it will be interesting to see how the film and the jokes hold up. It feels like a generic action-comedy you would expect these days, but it is a generic action-comedy I enjoyed from start to finish. 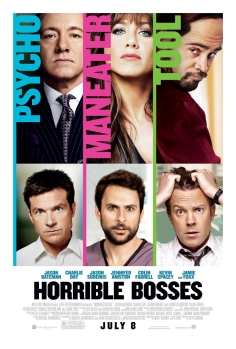 Synopsis
Nick (Jason Bateman), Kurt (Jason Sudeikis), and Dale (Charlie Day) hatch a plan to kill their bosses when they each push the three friends too far.

Review
Sometimes I will watch a movie simply based on the cast. I usually like slap-stick comedies like Horrible Bosses, but what really drew me towards the film was the cast. Having Jason Bateman, Jason Sudeikis, and Charlie Day play off each other was a great decision. Then adding in Kevin Spacey, Jennifer Aniston, Collin Farrell and Jamie Foxx is just icing on the cake.

The three main cast members each have their own unique comedic styles. Bateman, Sudeikis, and Day are able to bounce off each other to side-splitting effect. Their timing and deliveries are nearly flawless. Some of the best moments come when these three are together. Foxx is only in a handful of scenes with the guys. He never outshines any of them, but he does well not to be eclipsed by them either. I think if his part would have been bigger it would have been too much, so he maintains a good balance with the three leads.

Each of the three bosses are horrible for different reasons. Harken (Spacey) is condescending toward Nick (Bateman), Harris (Aniston) sexually harasses Dale (Day), and Pallitt is self-centered and doesn’t care about his employees, especially Kurt (Sudeikis). Farrell’s performance surprised me the most because I haven’t seen him in a comedy before. Spacey easily pulls of the intimidating corporate president with ease. I have been a fan of Aniston for a while, but after watching her in R-rated comedies such as this and We’re the Millers, she is becoming one of my favorite comedic actresses.

Although the cast is great, the script is equally hilarious. It is equal parts crude and humorous. There are so many memorable quotes they can easily be quoted for days. At times the script can be vulgar but it never becomes obnoxiously so. There are also moments of sincerity but not so much that it becomes hypocritical. It manages a fine balance between the two.

Horrible Bosses manages to work on so many levels. The awesome cast and fantastic script, not to mention some great cameos, make this film a stand-out comedy.

Favorite Quote
Det. Hagan: “Do you want to explain why you were going 61 in a 25 zone? One block from the victim’s house just moments after he was shot dead?”
Nick: “I was drag racing. I’m a drag racer.”
Det. Samson: “You were drag racing? In a prius?”
Nick: “…I don’t win a lot.”