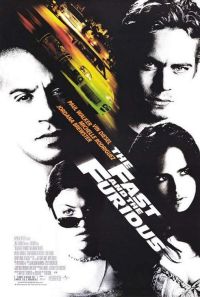 Synopsis
In order to investigate a series of robberies, Officer Brian O’Conner (Paul Walker) goes undercover with a street gang lead by Dominic Toretto (Vin Diesel). When O’Conner gets hooked on street racing and falls for Toretto’s sister, Mia (Jordana Brewster), he must determine where is loyalties lie.

Review
The Fast and the Furious is one of those films that is so simple it works. The plot is straightforward and isn’t filled with any twists and turns, but uses that simplicity to draw you in. The movie opens with a fast-paced highway hijacking sequence, which does well to set the pace for the rest of the film. Since the cars are the focus, every car that drives on screen looks slick and stylish. Even if you aren’t a car junkie, there is still plenty to get excited about. With a central focus on street racing, just about every other scene is lightning fast and contains the blurred outlines of cars speeding that just watching can give you an adrenaline rush. Even during the slower scenes, it still never feels sluggish and keeps moving at a brisk pace. The Fast and the Furious understands what type of movie it is and doesn’t try to be anything more. With some fast cars and energetic action thrown in for good measure, it’s hard not to get drawn in and enjoy the ride.