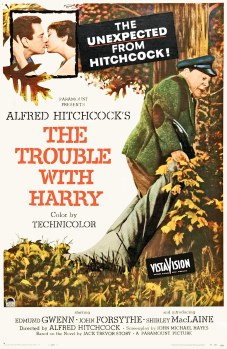 Synopsis
The trouble with Harry is that he is dead and, while no one really minds, everyone feels responsible. After Harry’s body is found in the woods, several locals must determine not only how and why he was killed but what to do with the body. (via IMDb)

Review
The Trouble With Harry is Alfred Hitchcock’s attempt to try something outside of what is expected of him. I didn’t know this was a romantic comedy going into the film so when the characters started cracking jokes, it took me by surprise. It was a pleasant surprise but a surprise nonetheless. However, if there was a non-horror story that Hitchcock was going to tell, this is very fitting of him. In true English fashion, the humor is very macabre and dark. The movie’s sense of humor might not be for all audiences but I enjoyed it; it reminded me of Weekend at Bernie’s in a way (which might not be the best movie for comparison but whatever). Even with the premise, no matter what happened, Hitchcock always managed to keep the film light and witty, never leaning too far into the dark humor that it becomes uncomfortable. The romantic pieces that were intertwined with the black humor made for an… interesting combination. Thankfully, the couple pairings of Edmund Gwenn with Mildred Natwick and John Forsythe with Shirley MacLaine were able to provide a levity to the film. Each pair was cute together and played well off each other. I’ve come to the conclusion that not only was Hitchcock a master storyteller but a master caster as well.

I thought The Trouble With Harry was GOOD 🙂 It was good for what it was but definitely doesn’t compare to his other films that I have seen. The macabre humor was fitting for a Hitchcock film, regardless of genre, and I enjoyed it but it might not be everyone’s cup of tea. I like to see directors try things outside their normal cadence and while The Trouble With Harry might not be one of Hitchcock’s best films, it is entertaining all the same.

Favorite Quote
Sam Marlowe: When I saw him, he was dead.
Jennifer Rogers: He looked exactly the same when he was alive, only he was vertical.