Well would you look at that, I’m late to the party. I know, big surprise coming from me, the blogger who is cursed with giving late submissions and forgetting deadlines. I don’t know how you guys put up with me! Anyway, Conman has put together an excellent blogathon that I just had to participate in, and he is more than generous to allow my late submission. Look here for the rules. Thanks Conman for hosting such a wonderful blogathon! Let’s jump right into my picks, shall we?

I know I’m in the minority here, but Return of the Jedi is my favorite of the Star Wars films.  It was the most action packed of the original trilogy, having not one, not two, but THREE battles occurring simultaneously. During the course of the movie, the Rebel Alliance gets their final victory over the evil Empire, destroying the Death Star II.  And Luke redeems his father, Anakin, destroying Darth Vader, who turns on his former master and killing Emperor Palpatine.  And Han and Leia finally express their love for each other. There is so much Joy to go around, the Ewoks celebration at the end perfectly expresses up my feelings. Or at least Yub Nub did. George Lucas, y u no like Yub Nub!?

Let me first say that Toy Story 3 is a great movie. It is a nice evolution of the characters and messages of the previous two films and a great conclusion to their story.  The reason I included it as my Sadness pick is because it makes me cry harder than any other movie. I have only seen it twice, once in the theater and a few weeks ago as part of my Anniversary Week celebration, but the ending gets me every time.  Now, I don’t consider myself a crier. I get teary eyed for sure, but I don’t cry. Last time I watched Toy Story 3 cried. Hard. For like 10 minutes straight, before, during, and after the scene with Andy and Bonnie.  I’m so glad I was watching it alone…

This emotion was a little difficult for me to think about because I don’t particularly care for horror films.  I probably could have though out of the box a little but I’m not that creative.  So when choosing one of the few I’ve actually seen, I decided to choose one that I actually liked.  I enjoyed Insidious because I have discovered that I don’t dislike supernatural horror films, like this or Mama, as much as other horror sub-genres. There are plenty of jump scares and the cinematography is pretty good with its use of lighting and shadows.

Rage somehow slipped by my radar. I didn’t even hear about it until about two weeks ago. The title “Rage” pretty much sums up my feelings about the movie.  The movie itself isn’t good but throughout the movie I was willing to go along with it. It never really built up to anything. Then the reveal happened and it hit a wall. This film didn’t slowly go down hill, it got their quickly and abruptly.  After the movie was done, I began ranting about how bad it was. Take this paragraph times, like, five for an example. I don’t rant often, so it felt good to let it all out.

Originally, this was going to be my pick for Anger. But the more I thought about it, it fit more under Disgust. For some reason, I really wanted to see this when it came out in the theater. I can’t remember what else was out around that time, but I convinced the rest of the group to go see this over whatever else they wanted to see. I immediately regretted my decision.  After the film was done, I apologized to my friends for making them go see this. It was a mess of a film and I can’t believe it actually got made. At first I was angry about how bad it was, then I realized my disappointment outweighed my anger. Hopefully Marvel will take a stab at the character because he is actually kind of cool. 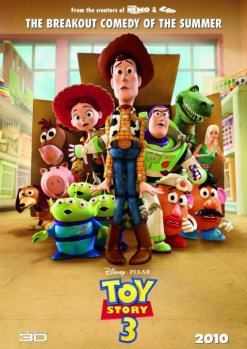 Synopsis
Andy (John Morris (voice)) is preparing to leave for college and must choose what to do with his toys. He decides to keep Woody (Tom Hanks (voice)) and put the rest in the attic. However, the toys are mistakenly delivered to Sunnyside Daycare. Thinking that Andy was throwing them out, Buzz (Tim Allen (voice)), Jessie (Joan Cusack (voice)), and the rest of the gang choose to stay at Sunnyside where the will be played with everyday. They soon discover than Sunnyside isn’t as cheerful as they thought and try to return home.

Review
When I heard Pixar was making a third Toy Story film, I was filled with excitement. I had grown up with Woody, Buzz, Rex, Hamm, Mr. Potato Head and the rest of the gang. And Andy was about to head off to college, an experience I went through a few years earlier. Basically, I had been waiting 11 years for this moment. But the question was could Pixar deliver a third fantastic outing with these characters? You bet they can!

Another thing I noticed from watching all the films together is that each movie builds on the theme of the movie preceding it. I also mentioned this in my review of Toy Story 2. Toy Story was about building friendship, Toy Story 2 was about accepting that everything has an end and to be there for your friends while it lasts. Now, Toy Story 3 is about letting go. The message has grown up with the franchise’s audience.

Pixar single-handedly created the computer animated film with Toy Story in 1995. In the fifteen years since, it has come along way. One of the benefits of revisiting these characters and this world is it acts as a great measuring tool to see how far computer animation has come in that time. Toy Story 3 is absolutely stunningly gorgeous. The animation is leaps and bounds ahead of where it was a decade and a half earlier. Everything is so colorful and full of life. The daycare especially with all its colorful walls, paintings, and furniture. Even the dark contrasts, such as the toy’s gambling area inside the vending machine or rainy scene with Lotso, which are up there with How to Train Your Dragon. It’s breathtaking to think how far animation has come and that it still is only going to get better.

You’ve done all this reading and I haven’t even gotten into talking about the film itself yet. Sunnyside Daycare is one of the most unique places created in the Toy Story universe. There are so many toys it’s ridiculous. Lots-O-Huggins Bear, voiced by Ned Beatty, may be my favorite Toy Story villain. I think his motivations were deeper than Stinky Pete’s from the previous film. Although he did feel similar to Pete in that he hid his true self under a fun, happy visage. His inner circle were all unique, too. The popular Ken, a stretchy octopus, and a few others for muscle round out the group.

Bonnie’s toys were all enjoyable as well. I found it hilarious that Jeff Garlin voiced the unicorn Buttercup. His voice isn’t what I would expect to come out of the mouth of a unicorn, which may be why it works so well. Timothy Dalton was the perfect fit for the Shakespearean Mr. Pricklepants. Another favorite of mine was Kristen Schaal as Trixie, another dinosaur toy. She was so full of energy and spunk.

The story feels like a natural progression of Woody and Buzz’s journey. We all have been through (or will go through) a time when we have to let something, or someone, go that we dearly love. In typical Pixar fashion, this was handled with care and in a way that all audiences, young and old, could understand. For many of the kids who grew up with Toy Story and Toy Story 2, and the parents forced to watch them too, the ending was very powerful, not leaving a single eye dry. It was an organic and very fitting conclusion to the characters’ story arc.

I think the only knock I have against this film is that the ending gets very dark. I had the same problem with Up, except that was in the beginning. It just wasn’t a place I expected the movie to go and took me out of it for a little while.

Toy Story 3 perfectly closes the story of Woody and Buzz. There are a ton of fun, new characters and places. Every time I go into a Pixar movie, I expect to be torn apart emotionally. There have bee many tear jerking moments that have happened because of Pixar, but the final scene between Andy and Bonnie hit me the hardest. The Toy Story series is such an emotional journey and I’m proud to say I’ve been there very step of the way.

Also read my reviews for Toy Story and Toy Story 2.