Here we are at the end of my Christmas in July celebration / blogathon. So far we’ve heard about It’s a Wonderful Life from Rob, and National Lampoon’s Christmas Vacation from Natalie. Now it’s my turn, the hostess with the mostest. Let’s get started! 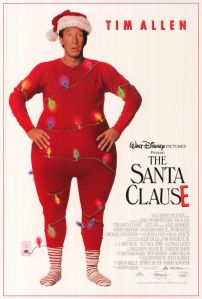 Synopsis
Scott Calvin (Tim Allen) is a toy salesman going through a divorce and is trying to stay close to his son, Charlie (Eric Lloyd). When Santa Claus falls off Scott’s roof, he puts on Santa’s suit, reluctantly becoming the new Santa Claus.

Review
Every Christmas holiday season, there are a few movies I make sure I watch. The Santa Clause is one of them. I am a fan of Tim Allen, but was especially so in the 90s, he was in Home Improvement, one of my favorite shows at the time, and he would eventually voice Buzz Lightyear in my one of my personal favorites, Toy Story, just a few years later. So it seems natural I would be drawn to this film. He brings the same sense of humor he gave Tim Taylor (his character in Home Improvement) to give Scott Calvin heart, creating somebody who is easily relatable. His journey from reluctant Santa to joy-bringing Santa is sure to warm anyone’s heart. The supporting cast is pretty good, too. David Krumholtz stands out in particular as the sarcastic head elf, Bernard. I also like how different aspects about Santa Claus were visualized, such as the way the bag of toys always refills itself or how Santa enters houses without a chimney. The Santa Clause is the perfect Christmas movie that does exactly what it should do: tell a feel-good story around the meaning of the holiday season.

And with that, today’s Christmas in July festivities are concluded.  Thank you to Rob and Natalie for participating.  Have you been wondering where I have been lately?  I’ll have an announcement on what I have been up the the last few weeks soon.