First up today is none other than Kelechi, the mind behind Confessions From a Geek Mind. She reviews a ton of movies and has a weekly soundtrack feature. There is a lot of great content to be found so go check her site out when you get the chance if you are unfamiliar with it.  Kelechi stops by with her review of the nontraditional Christmas film Edward Scissorhands. Take it away, Kelechi! 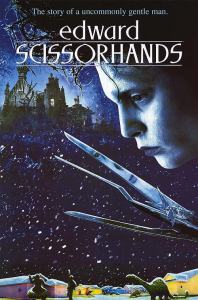 Welcome to a winter wonderland…

That’s what Tim Burton’s Edward Scissorhands captures in the opening credits. As we enter through its doors it’s a glimpse of another world, a world of inventive and mechanical creation. We witness the birth of Edward (Johnny Depp), a man with scissors for hands and the death of his father and creator (Vincent Price), told musically like a dreamy fairy tale thanks to Danny Elfman’s magical score.

It’s easy to overlook the beauty and power of Edward Scissorhands. When it comes to Christmas films, the usual suspects all appear – Home Alone, It’s a Wonderful Life and even Die Hard. But Tim Burton’s film is the perfect balance of the usual wintery escape and the beautiful surrealism of a misunderstood soul.

Edward’s tale is a classic fish out of water scenario, born out of fascination and curiosity. He lives in Gothic mansion surrounded by a Yin Yang balance of his imaginative creations and the periodical darkness of the mansion which hides his gift, talent and most importantly himself. His isolation from the outside world suddenly changes when he meets Peg Boggs (Dianne Wiest), plucking him out of his sheltered life and introduces him to her world. To Edward’s amazement, it’s much bigger than what he’s use to.

Through Edward’s eyes we watch him explore his new world. He’s never had to wear clothes, eat at a dinner table or drink alcohol for the first time. As he’s slowly integrated into society, he’s treated as the local celebrity and an in-fashion trend. The deeper that integration takes on, the more he feels welcomed. The Bogg’s family don’t view Edward as someone having a disability. They adopt him and nurture him into their lives as if he was one of their own kids. Peg tries to be considerate and her husband Bill (Alan Arkin) delivers fatherly advice – sometimes oblivious to Edward’s internal plight and told with an unintentional comedic effect. However strange Edward’s new world is, he feels a sense of belonging, a feeling further increased when he sees Kim for the first time (Winona Ryder).

There’s a clever Frankenstein ideology that Edward Scissorhands taps into. Just like Mary Shelley’s novel, Edward was an unorthodox experiment by The Inventor. The story is not concerned on the major details or back story but it’s easy to imagine a possible degree of loneliness. Sparked by love and a creative burst of an idea, Edward started to take shape, embodying The Inventor’s gifted talents. Unable to complete the final task of giving Edward real hands, the fear of Edward’s appearance is unsettling and to some others intimidating. He’s a monstrous creation. Kim is essentially the Bride of Frankenstein – in the unconventional sense. She’s not a mirror image of Edward. She doesn’t have metal scissors for hands but her beauty bedazzles him. He sees through the troublesome relationship with Jim (Anthony Michael Hall), awakening an emotive and empowering connection. Just like Sleeping Beauty, Kim awakens from her clouded slumber. Her rejection slowly evolving into love, compassion and magical wonder – a dance she performs at seeing snow for the first time.

So why does the story of Edward resonate with us so much? As much as Edward Scissorhands is a tragic love story, not given the traditional happy ending, but it is a film about acceptance and a search for happiness. Edward can’t change the fact that he’s different from others nor could he prevent his creator from passing away. From his limited, often monosyllabic responses, inside his mind and heart is a container full of emotions, expressed through his highly creative art as a way of dealing with being an outsider in a complex society. His mind is a bottled-up cavern containing memories of happiness as well as grief, brought the surface for the audience by his interaction with others. Even though the Boggs family do as much as they can to protect, love and celebrate Edward, the world can be judgemental.

The community in Edward Scissorhands are not evil. Director Tim Burton makes a clear distinction about suburban life in comparison to other films which paints suburbia as a dark underbelly. They’re more hypocritical, simply fearing what they don’t understand. They’re too quick to take advantage of his unique ability but not enough emotional sympathy to connect with him like Kim does. When trouble escalates from one incident to another, they instantly revert back to their default positions where they gossip and make excuses. The only difference is that they can’t shut the door on the problem. Their lack of empathy affects someone who just wanted to fit in and belong.

Edward has an honest and gentle soul, more human than anyone wants to admit and his story is a tale of self-discovery. Despite being forced back into exile, Edward Scissorhands is bookended by elderly Kim who refuses to let him die, telling Edward’s story to her granddaughter. Edward’s Pinocchio-esque concept is realised. Empowered by Kim’s love he comes alive. He becomes real, guaranteeing that he lives forever.

Edward’s creativeness brought positivity to a suburban community well versed in the mundane. He brought individualism and escapism when others went around with a self-centred norm. Even though it didn’t last for long, it goes to show how someone can make an impact with the smallest of differences.

It still remains my favourite Johnny Depp performance, encapsulating a childlike innocence of someone who wants to be loved for who they are and not what they are. At the heart of it, Edward Scissorhands is an unconventional yet poetic Christmas film. It’s not a story designed to sell commercial gifts nor is it some forced whimsical exploration at saving Christmas. Often dark and slightly graphic, it escapes conformity by embracing a unique simplicity.

It’s a fantastical look into human nature with a lot of heart and soul. It forces us to re-assess how we view others in our communities who are different in the hope we may reach out in kindness rather than push away in fear. Christmas serves as the backdrop to bring the magical fairy tale to life.

You couldn’t ask for a better film than that.

Thanks, Kelechi! I have a bit of a confession to make myself: I haven’t seen this film. 😐 Now you might be asking yourself “Who did Kelechi invite to the party?” Well, it was the talented Idris Elba, of course!

Every party needs a suave, handsome guy and Elba fills the role perfectly. Great choice, Kelechi! Lover of all things Christmas, Allie from Often Off Topic, gives her own list of Christmas films she has for a very special person later today. You won’t want to miss it!