Here we are, at the end of week 2 of the Ultimate 2010s Blogathon. Today we are joined by Curt from The Hypersonic55’s Realm of Reviews and Other Stuff. Curt hosts the Film Focus podcast, which I have been lucky enough to have been a guest on several occasions. He talks about all kind of film related topics on his podcast from film reviews to soundtrack discussions to best of lists. If you like cinema, chances are he has an episode for you. Go give it a listen once you finish here. For the blogathon, Curt reviews the latest and final entry in the Ip Man series, aptly titled Ip Man 4: The Finale.

Good day to you ladies and gentlemen, today I wanted to share with you my entry for this blogathon and one of my favourite films in recent times; Ip Man 4: The Finale.

So this is the fourth and final entry in this series of films based on the real life Wing Chun grandmaster that taught Bruce Lee. In this film, the story focuses on Ip Man’s journey to America to not only find a school for his son but also check in on his former student Bruce Lee who has caused issues with other martial arts practitioners because he’s opened up his own school. While over there Ip Man witnesses the friction in not only within the Asian martial arts community but also their relationship with white people. And due to a series of escalated incidents Ip Man finds himself stepping another situation where he must use his skills to not only help his fellow people but also fight in the name of justice.

I love the story for this film, it’s consistent in tone and the themes of the previous films when it comes to prejudice, exclusivity, standing up to injustice and spreading the joy and positivity of martial arts to everyone. There’s also a little more drama and melancholic tone to this film as Ip Man deals with some personal issues and the strained relationship with his son. That being said there are moments of humour sprinkled without which is utilised very well. Though it’s a little over dramatized, the story still executes the emotional impact and by the end, there’s a beautiful sense of finality to the film.

The cast was also fantastic. Donnie Yen returns as Ip Man and is still incredible. Beyond being able to kick ass with style, speed and precision, he really acts the hell out of this role demonstrating a range of emotions in a reserved manner primarily through facial expressions and calm tone of voice. It was also great to see Kent Cheng return as Ip Man’s friend Fat Bo. Wu Yue was great as Wan Zong-hua chairman of the Chinese Benevolent Association. His daughter, Yonah played by Vanda Margraf was also quite fun and endearing. I also liked Vanness Wu as Hartman Wu. And then there’s Danny Chan as Bruce Lee was damn good, I’ve seen quite a few actors portray Bruce, but this guy was probably the most convincing not only in terms of personality and look, but with the fighting technique and movements. And Scott Adkins as the main antagonist Barton Geddes was great. While his character was a little over the top, he was a compelling villain due to his appearance, intense and mean personality and physical prowess. I think Adkins should play more villains in films as he has a knack for it. 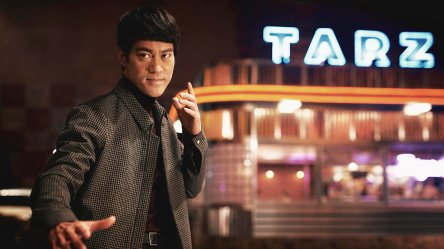 When it comes to the presentation it’s great. Visually the film is very impressive and the way it presents the action is nothing short of spectacular. The Ip Man films have all brought an incredible sense of power, intensity and intricacy to the fight sequences and Ip Man 4 have some of the best yet. All of the fights are meticulously designed, make great use of their surroundings and have a wonderful balance between realism and the theatrical which makes the fights feel entertaining and larger than life but not too far for it to not be engaging. Everyone strikes with purpose, each punch and kick has impact and because of the fight choreography and sound effects, you feel the crunch. Also, there are several martial artists with different styles that fight each other and to see those styles clash is so cool and captivating. It’s breathtaking. And the music is once again handled by Kenji Kawai and his work is still great. He borrows themes from the previous films, but he also composes new pieces which amplifies everything on-screen and really emphasizes the emotional scenes.

In the end, Ip Man 4 is another incredible entry in this series and is arguably the best in the series with a great central performance from Donnie Yen, a great story and wonderfully choreographed fight scenes. If you’re a fan of martial arts films you owe to yourself to check this film out.