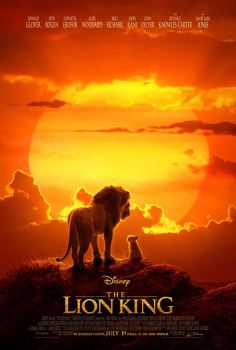 Synopsis
Simba (JD McCrary/Donald Glover) is the prince of the Pride Lands. When his father, Mufasa (James Earl Jones) dies in a tragic accident, Simba flees until his responsibilities to his pride draw him back.

Review
As a kid, I watched a lot of the animated The Lion King, not nearly as much as Aladdin or Toy Story, but still quite a bit. Of the three live-action remakes Disney released this year, this was the one I was most worried about. How can you add to an already amazing story? The answer is apparently you can’t. I mentioned in my review of the live-action Aladdin that the remakes of the more recent films remain largely the same as the animated versions and this film is the biggest culprit of that. While the film itself runs an extra half hour longer than the 1994 version, the story and characters are exact mirrors of their animated counterparts. One of my criteria for a remake being worthwhile is if it brings something new. Usually I’m referring to the story or characters but this movie does bring something new: showcasing the realism possible with animation today.

I hesitate to call this film “live-action” because it is all computer generated. If a movie tries to use a lot of CGI and it’s not great CGI, it can take the audience out of it. However, despite every character being CGI, it never once took me out of the experience. Everything seemed so real and life-like I’m very impressed. This film will have you questioning whether or not you are watching live animals and not computer generated ones. While this being seeped in this level of realism is breathtaking, it unfortunately comes with some downsides. For one, it is really difficult to tell the lion characters apart. Like the animated version, the characters have different shades of fur but this time, they are so similar, it can be hard to discern them apart, particularly during any kind of fast movement. Another downside is the CGI animals are also less expressive than what 2D animation provided their predecessors. Animal faces naturally don’t have the same range of displaying emotions as human faces. Cartoon can circumvent this pitfall but such a realistic looking movie such as this cannot get around this shortcoming so easily.

I thought The Lion King was GOOD 🙂 Much like the Beauty and the Beast and Aladdin live-action remakes, this remake follows the story of the animated version very closely, even more so than the others. That being said, it is a good story and this film does show off beautiful life-like animation. But the lack of individuality prevents it from receiving my same rating as the original.